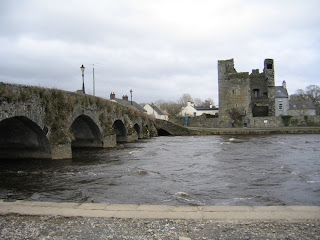 It's been a long time since I posted anything, but there really hasn't been much to talk about. Not unless you want to read about snow and ice, and the fact that Spring is really late in coming to Ireland. Over the last week or so though, it seems to have exploded. Or at least, the daffodils are out finally.
.
With the better weather--notice I didn't say brilliant weather--we're able to get out at least one day on the weekend and take a spin around to see the area around where we moved October last year. Sunday, that journey took us south of Monasterevin for a change to a place called Leighlinbridge, pronounced as lough-linbridge, not lee. Very strange, but what do I know?!
.
Our main reason for the journey, which is about an hour drive, was for the Arboretum Lifestyle & Garden Centre, which is an interesting place. They're on about twenty-two acres of ground overlooking the River Barrow, which flows out of County Kildare and eventually out to sea near Waterford. The center is a mix of homewares, garden and pets. They have a restaurant on site, an aquatic shop, manicured gardens with interesting sculpture overlooking the river, a chocolate shop, woollen mills, and the plants, of course. The place immediately reminded us of a similar place in Welshpool, Wales called Coed-y-Dinas, though on a much smaller scale.
.
The food in the center was actually very good. It's obviously a popular place for the traditional Sunday lunch! For those not there to eat, there was plenty to do. I was particularly taken with the dog toys, rabbits (they sell angora's!), and kitchenware. Overall, it was an interesting couple of hours.
.
Afterwards, we took a spin around the locale. Leighlinbridge is a small village on the river. It was founded in Normal times, but was inhabited long before that, as Kings of Leinster had their seat nearby. The town gets its name from the Irish Leithghlinn an Droichid, which means Bridge of the Half-Glen. The brid 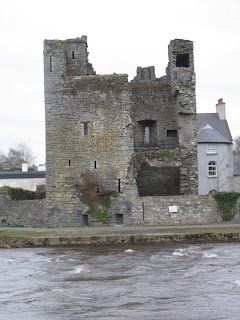 ge in the village spans the Barrow with five large arches and it said to be one of the oldest continual functioning stone arch bridges in not just Ireland, but Europe. It was built in stone in the 14th century.
.
The castle beside the bridge is known as Black Castle and dates back to about 1180 when the original timber keep was most probably built by Hugh de Lacy, though it's also been credited to John de Clahull in 1181. de Lacy has the stronger history though. The current stone keep was built by Sir Edward Bellingham in 1547 who named the keep Black Castle. Bellingham was Lord Deputy of Ireland, as he was a reputed man of war, and kept his finest horses here. His career was short-lived though, as he passed away in 1549 just as the castle was completed.
.
The castle was sacked in 1650 and eventually fell in the Cromwellian war, 1649-1653, and today the keep looks much as it did after it's destruction, which includes the 50 foot tower and partial bawn walls. I'd love to return the next time we're in the area and take a stroll through it, if it's open to the public. Nothing like castle trolling!
Posted by Kemberlee at 6:21 PM