How could I not blog about this?!

Back in 1995, a South Gloucestershire man called Winston Howes lost his beloved wife, Janet, to heart failure. She was just 50. They had been married 33 years. That's right. They married when she was just 17!

So in love with Janet and so beside himself with grief, Winston struggled to find a way to honor Janet's memory.

What did he do?

Not just any tree and not just a few trees. But over a thousand English Oaks!

A farmer with 112 acres, he planted his oaks in a six-acre field. It took him a week to plan on his own, which included marking out a lovely heart in the center of the field, the tip of which points toward the town where Janet grew up.

If you can imagine what a heart meadow in a grove of a thousand oaks looks like, just check out Google Maps. There it is at the one o'clock position from the town of Wickwar in the heart of South Gloucestershire.

I don't know about you, but that's what I call love!

You can read the article here. 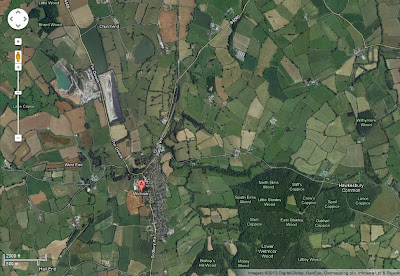