Something old is new again

Who cares, you say?

What if I were to tell you that this pen has connections to Vlad Țepeș...

Well, it's all true, and I have a certificate of authenticity to prove it!

The timber used to craft this unique pen is reclaimed from the old church after renovations, and has been certified that the timber felled for the church dates back to the 17th century.

OK, so Vlad III, Prince of Wallachia, was alive in the 15th century, but Bram Stoker's Dracula had slightly more recent ties to the church with his creation of Count Dracula, in his work Dracula, published in 1897.

The box contained a great little booklet with history about St Mary's and the connection to Count Dracula of Bram Stoker fame.

It includes some photos and some interesting narrative. I think just as interesting are the vials of earth and sand included in this nifty box. 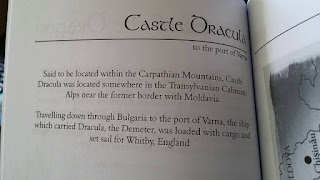 Why have they done this?

Well, based on the story, the ship, The Demeter, sailing from Varna to Whitby was full of silver sand for ballast, and several coffins filled with 'mould', or earth.

Whitby, being a coastal community, would have sandy beaches.

So a bit of sand from both countries and Bulgarian earth to represent what was in the coffins.

9 August -- The sequel to the strange arrival of the derelict in the storm last night is almost more startling than the thing itself. It turns out that the schooner is Russian from Varna, and is called the Demeter. She is almost entirely in ballast of silver sand, with only a small amount of cargo, a number of great wooden boxes filled with mould.

For a moment or two I could see nothing, as the shadow of a cloud obscured St Mary’s Church and all around it. 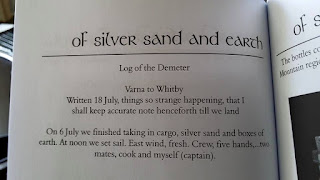 Then as the cloud passed I could see the ruins of the Abbey coming into view; and as the edge of a narrow band of light as sharp as a sword-cut moved along, the church and the churchyard because gradually visible.

Whatever my expectation was, it was not disappointed, for there, on our favourite seat, the silver light of the moon struck a half reclining figure, snowy white.

The coming of the cloud was too quick for me to see much, for shadow shut down on light almost immediately; but it seemed to me as though something dark stood behind the seat where the white figure shone, and bent over it. What it was, whether man or beast, I could not tell…

Of course, now I want to reread Bram Stoker's Dracula (a free read these days).

How cool would it be to visit Bran Castle (you've got to see this video with the volume up!)?!

And I've only to drive down to Dublin City to see the house at 30 Kildare Street where Stoker lived while writing Dracula.

For anyone interested in buying one of these one of a kind hand crafted pens (they also do ballpoint), just contact York and Beyond, who also sell pens with historic timber from Yorkminster Abbey, and timber felled on the Bronte estate.

Posted by Kemberlee at 7:13 AM