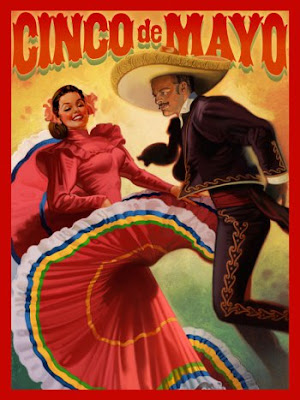 Wow! Can you believe it's May already? I can't. We're nearly half way into the 'new year'. But what a great way to spend it today.

What is Cinco de Mayo?

Many would say it's the day of Mexican independence, but that's untrue. The official date of Mexican Independence Day is actually 16 September and known as Grito de Dolores, the Cry of Dolores?

This goes back to what, exactly, is Cinco de Mayo? Why is 5 May so important?

Today marks another battle in Mexican history. This battle was between Mexico and France! 5 May is observed to commemorate the Mexican Army's unlikely victory over French forces at the Battle of Puebla on May 5, 1862...nearly 50 years *after* Mexican independence. The French troops were in greater number, better quipped, and better trained, than the Mexican forces. Yet, it was Mexico who prevailed in this battle.

Well, you can thank the American drinks industry for this. Seriously. While Mexicans in Dolores do host an annual feast to commemorate winning the Battle of Puebla, the event is much larger in the US. Immigrant Mexican's are often surprised how big the feast day is in the US compared to their home country...because of the American drinks industry, who took the Mexican holiday to start promoting Mexican alcohol on this day, such as Corona, Dos XX, Modelo, Sol, Tecate, and other beers, as well as tequila.

Once the drinks companies started promoting alcohol on this Mexican holiday, the holiday grew exponentially to the massive event we have today...a day when everyone is Mexican! It's grown to the proportion of the Irish St Patrick's Day...again, thanks to the American drinks industry.

How do we celebrate?

Putting up traditional decorations, preparing many Mexican and Mexican style dishes, and playing games. And of course, Mariachi's and dancing!

One of the most popular games is the piñata (pronounced pin-ya-ta), which is a cardboard figure covered in crepe paper and filled with sweets. The most popular design is of the donkey or burro, but today you can even get them in the shape of popular, and not so popular, political figures ;-)

How does one play?

This is a fun children's game where each child gets three whacks before handing the stick over to the next child. Players are blindfolded, given a stick, spun around to disorient them, then they try whacking the piñata with a stick until the treats fall out. The one who breaks open the piñata wins.

What kind of decorations?

The origin of the word mariachi stems from many translations, but essentially, this is a type of regional music that has come to symbolize all of Mexican traditional Music. The band can have anywhere from five to fifteen members, several playing violins and guitars, horns, and the guitarrón, which is a bass guitar...seen here above in the center of the picture.

Mariachis are expected to know hundreds of songs, as one of the primary functions at events is taking requests.

Mariachi Vargas de Tecalitlán is recognized as the oldest and most famous mariachi ensemble, founded by Gaspar Vargas in the late 1890s. 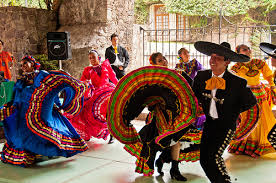 Mexican Folk Dancing is performed by well-trained dancers wearing colorful dresses with huge skirts that are spun and swirled through many dances. Mexico’s modern folk dance tradition is a blending of elements from its Indigenous, African and European heritage. But was recognize today is known as Jarabe dancing which has its roots in Jalisco, and became a political tool to evoke feelings of patriotism and “liberty.” And today symbolizes freedom and joy during many Mexican events. These folk dances also include fandangos, huapangos, jotas, boleros, zambras and zapateados, and are performed by men as well.

And what about the food?

I know you've been waiting for this section :-)

Mexican foods are as diverse and exciting as the Mexican culture and heritage. With such a large country, every region has it's own influences, ingredients, spices, and versions of so many traditional dishes we know and love...enchiladas, tacos, burritos, flautas, menudo, frijoles, quesadillas, mole pablano, tamales, tostadas, and so much more. {drool} One of my favorite ways to start my Cinco de Mayo day is with Huevos Rancheros, which literally translated to ranchers eggs...aka Mexicanos. The basic dish is composed of fried eggs served on lightly fried/softened corn tortillas which are topped with a type tomato-chili sauce, or enchilada sauce or salsa. Common additions include frijoles, Mexican rice, and either slices of avocado or guacamole.

When I was growing up, we feasted on what we just knew as egg and tortilla. The corn tortillas was dipped in hot oil for just a moment on both sides to soften, then patted dry and a fried egg was put on top. It depended on taste whether the eater wanted their eggs sunny side up, mashed yolk, or scrambled egg, but traditionally, this dish is served sunny side up. The egg was then rolled into the tortilla and gobbled down. Having these as an adult reminds me of my childhood, and kind of helps alleviate some homesickness now that I live so far away.

For the bigger Cinco de Mayo meal, I normally serve either tacos, enchiladas, tamale pie, or even a Mexican lasagna. Tonight, it's looking like tacos, or nachos. But those huevo rancheros are looking mighty good too!

Recently, another California expat, Lisa, joined me for a great Mexican meal in our home.

What was on our menu? 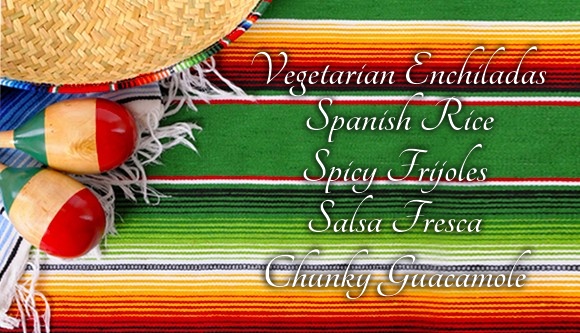 Here are a few easy recipes you can try at home:

Please note: Easy means using some premade ingredients. If you want to be a traditional Mexican mama, you can make your own individual ingredients before assembling ;-) :

Note: I use Blanco Niño authentic Mexican style corn tortillas here in Ireland. They're based in Clonmel, Co Tipperary and deliver to your door, fresh frozen! These tortillas are made with lime treated fresh corn masa, a little salt and water...no flour or other ingredients. Look for this type of tortilla wherever you are for the most authentic taste. If they have flour in them, send them back!

Start by putting a thin layer of sauce in the bottom of a rectangle baking dish to prevent the enchiladas from sticking during cooking.

Then, fill each tortilla by hand. For me, the easiest way is by cupping the tortilla in the palm of one hand, and using a spoon to add ingredients to the tortilla. Add the beans, rice, olives, onions, and cheese to the tortilla, then gently roll it together. Place in the baking dish, seam side down.

Fill all of your tortillas until the dish is full (you can usually squeeze in one more if you think it's full but don't sardine them.

Pour over the enchiladas your sauce of choice. Be generous. You want the tortillas to really soften when you bake them. Cover the tortillas well, and be sure you get some down the edges of the dish to prevent sticking.

Top with a generous amount of cheese, then add the olives and onions before covering with foil and putting into the oven.

Bake for about half an hour then remove the foil and cook until the cheese is browning and the sauce is bubbling.

Let the enchiladas rest on the sideboard for a short time (or open the oven door and turn off the heat, to let the cheese set up a little. Then serve with the following side dishes which you can prepare while the enchiladas are cooking.

Note: Start by putting the rice onto cook first, about the time you remove the foil from the enchladas. You can then prepare the salsa while it's cooking, which you will use in the Mexican rice and the guacamole.

Just before the rice is done, use a fork to loosen the rice in the pot. Then spoon in some salsa until you have the desired rice to salsa ratio. Add a little at a time but start with about 1/2 cup. Then spoon in a little tomato sauce and let it soak into the rice. Turn on the heat to low, cover the pot and continue cooking until the rice is tender.

My friend Lisa brought this to our meal, as she did the Mexican rice. Her recipe is an old family recipe which she's not sharing ;-) But I have a great recipe of my own.

Put all of the ingredients into a bowl and mix with a spoon. Easy!

Note: Double this recipe if you will be using it to make your rice and guacamole.

An important note on avocados: Do not use salad avocados, aka Fuerte avocados, as they're too watery. Look for a thick, dark green, pebbly skins which will tell you the fruit is suitable for mashing.

Hass avocados are usually best for guacamole...Hass and the larger Lamb Hass.

Lightly fork mash the avocados. When you have the texture you want, chunky or smooth, spoon in the salsa to your desired taste. Also add salt to taste, if you think it's needed.

How easy is that?! 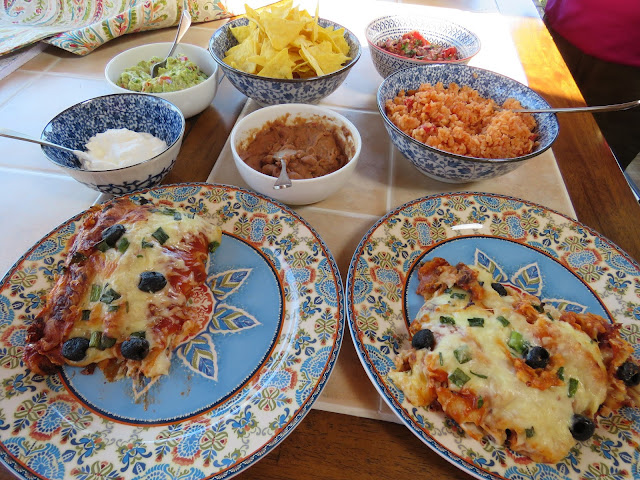 Be sure everything is hot, of course, but put out bowls for each of the side dishes...Mexican rice, frijoles, guacamole, salsa, and even some sour cream or creme fresh.

And don't forget the chips!! 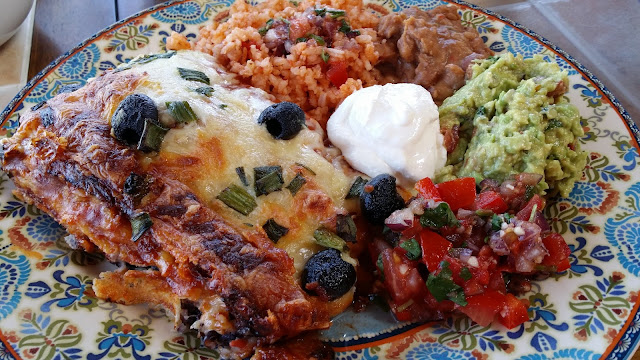 Posted by Kemberlee at 5:30 PM