So, we went back to Killarney today to see the bikes again and check out the closing ceremony. Most of the attendees had already gone, but out of 15,000 bikes, there was still a couple thousand around to look at. There was definitely a subdued atmosphere, but the weather was great and everyone was having a great time. H.O.G. Village was open for last minute sales in the seller's area, people were still eating and drinking from the on-site pub tent and generally just milling about. 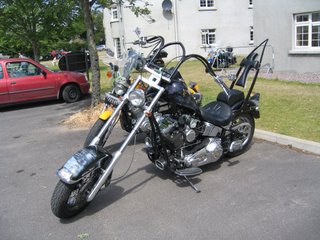 Why am I doing the Snoopy Dance? Well, if you read my post from yesterday, you'll see how disappointed I was not to have found a biker I dubbed The Preacher. Well, after wandering around for a couple hours this morning, we were just starting to walk to the exit when what did I spot? The Preacher's bike. When Peter turned around I was gonzo!

It's funny how first impressions are the ones you keep with you, even when continued evidence tries its hardest to refute your beliefs. Like how when I saw this particular bike with it's cross-shaped sissy bar pad and cathedral window styled decoration on the handlebars. The bike has a very Gothic feel to it...more so "Goth" in a more modern sense...ie: Goth as in a much "darker" meaning. The following pictures will show you what I mean. 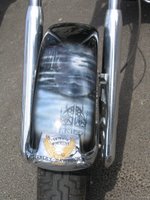 The artwork on this bike was incredibly well done. The front fender has a night scene, as are all the scenes on the bike. This one is the full moon looking over a Gothic castle on a clifftop, the gate of which is in the foreground of the image. A lot of detail for a narrow "canvas."

The tank had several images on it. On the left side was a wolf and full moon overlooking a couple grave markers, one marked with the owners name, Kruger, and the other with a Bible chapter and verse. Yeah, I looked it up.

Revelations Chapter 6 Verse 8 -- "And I looked, and behold a pale horse: and his name that sat on him was Death, and Hell followed with him. And power was given unto them over the fourth part of the earth, to kill with sword, and with hunger, and with death, and with the 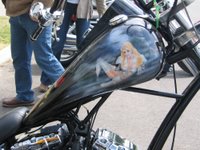 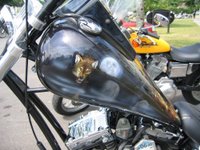 beasts of the earth."

See what I mean by a darker meaning?

The other side is a reclining lady vampire in a very sexy outfit. The grave marker beside her says Job Chapter 18 Verse 5 -- "Yea, the light of the wicked shall be put out, and the spark of his fire shall not shine." Looked up this one too. The internet is a wonderful thing! 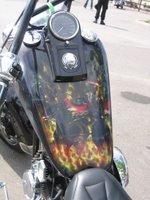 The top of the tank was no less impressive. If anything, it was the most impressive of the collection of artwork on the bike. Here, he's painted Death on a chariot racing through a fiery inferno.

Other interesting details included the cross stitched into the saddle (seat), the custom handlebars with the cathedral window-style detail and the padded cross shaped sissy bar pad, as well as a smaller artwork detail on the back fender, skull tail light and a half skull air intake cover. 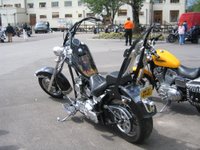 As you can see, this was a pretty unique bike. There were thousands of unique bikes, of course, but there's always one that really makes an impression...the kind of impression where when you see it you stop and go, "Wow!" and spend more than the usual time checking it out.

In case anyone is wondering, this bike got it's start in the world as a Heritage Softail. 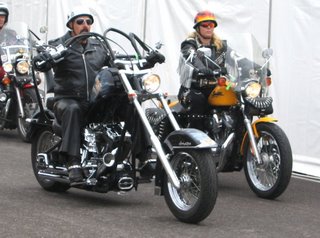 I wish the owner of the bike would have stuck around for some pictures, but I did find a picture of him in the several dozen I'd taken at the start of the parade yesterday so you can see what he looks like. This morning he wandered off with his lady just as we stepped up to the bike. I think she was less tolerant of the attention his bike was getting. Her little yellow un-costomized Sportster is the one in the background. Nice bike, for sure, but nothing like the Preacher's. Yeah, I'll still call him the Preacher...even though I'm certain his name is Kruger, by the numerous notes on the artwork and on the license plate. 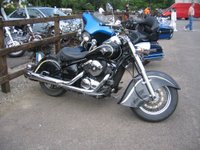 Yesterday I mentioned the Kawasaki that thinks it's an Indian. Here's a picture. The one I took yesterday didn't really do the bike justice. This is a lovely bike, but it ain't no Indian! And certainly no Harley. 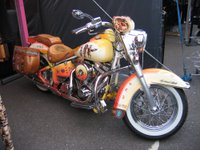 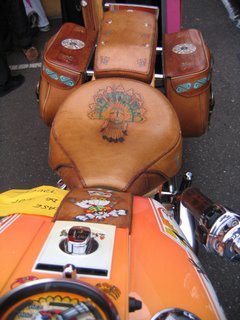 There were some other very handsome bikes on show. One of them was actually parked at a seller's tent. It's really hard to describe this bike other than to say it's a Heritage Softail like the Preacher's bike, but is in structurally original condition. It's the artwork that makes this bike unique. You've heard the saying, "A picture tells a thousand words"? Well, here are a couple thousand words to mull over.

I hope you enjoyed reading about our weekend. It was fun. Who am I kidding? It was awesome!! Still thinking about trading the Mini in for a Harley!! If I do, I'll have to find that sign seller guy from H.O.G. Village to buy the sign that read, "I'm the person your mother warned you about." =-)

~ Kemberlee
PS...As always, click on the pictures to enlarge the view.
PPS...for those of you asking to see more Scotsmen...here you go! 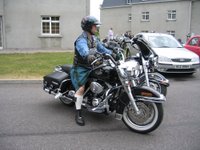 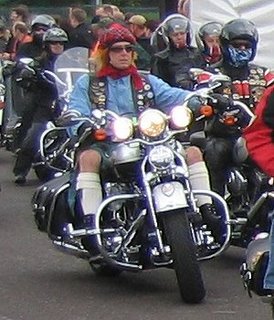 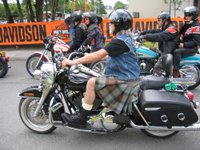 Posted by Kemberlee at 3:17 PM