I think my world just got better... 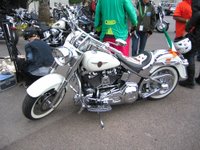 ...at least for the day. You see, I have a special place in my heart for a motorcycle. Not just any motorcycle, but a Harley Davidson motorcycle. And the Harley isn't just a motorcycle. It's a BIKE.

This is my rambling part, so bear with me...

Now, I wouldn't necessarily call myself a biker. Perhaps, more of a woman with biker tendencies. I've always loved the look for the Harley, the styling, the rumble when you're driving down the road...the Culture.

It's the Culture, and I capitalize it because it's like a religion to many enthusiasts, that seems to amaze me the most. Doesn't matter if you're a dyed in the wool, true-hearted biker to your core or just a weekend warrior; if you own a Harley you're an automatic member of a special culture that no one else is allowed into...no matter how Kawasaki, Honda and the others try to manufacture bikes that look, smell, sound and feel like a Harley! While a H.O.G. membership is ideal for all kinds of Harley perks, it's not required to be part of the Culture.

Certainly, there are those who don't own Harley's who are in the Culture. Your average Biker Betty, the Harley owner's better half, shall we say, doesn't own a Harley. BUT, she probably owns the butt that's in the saddle in front of her. And she's probably a Lady of Harley if she's on an associate membership. Even kids get Harley perks...and all the cool leather gear!

Harley, even for those who don't own a bike or are part of the Culture, can still change the average persons life. Just read God on a Harley by Joan Brady and you'll know what I mean. This was a small "spiritual fable" published back in the mid-90s that changed my life...well, was included in many things that changed my life at the time. This was a story of a mysterious biker HUNK who helped a woman see what the important things in life really were.

It's because of this Culture that no matter where you go in the world, if you meet up with a biker community, you're home. Plain and simple. All Harley owners and enthusiasts are family. Harley isn't just an iconic symbol. Harley is a way of life, no matter how often your butt is in the saddle.

So this all brings me to the subject at hand and why I love Harley's and why my world just got better, at least for today. Keep in mind, the Culture. 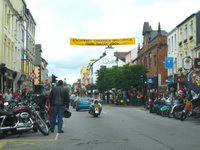 It was the 15th Annual H.O.G. European Rally this weekend and it was staged in the beautiful Southwest of Ireland -- Killarney, County Kerry. Some 15,000 bikes from all over the world were expected to attend. And we went! While the opening ceremony was Thursday evening and the closing will be tomorrow at noon, it was really a full two day event, today -- Saturday, being the Big Day.

H.O.G. Village opened at 8am, but as I've been to Harley rallies before, I just KNEW there wouldn't be many people about that early (not after the "night before"), so we headed in and arrived around 10:30am...30 minutes before the big bike parade through Killarney town. We didn't go into town. We would have been mad as Hatters to do that. We stayed in H.O.G. Village in probably the best spot possible...at the center of three driveways onto the main exit for the main road for town. We had bikes leaving the village in front of us, bikes coming out of the side car park to the right of us and more bikes coming out of the rear car park to the left of us. Parade staff let each exit point out in turn. Good thing or would be nursing whiplash by now! OK, more than we already are.

It took about 30 minutes to get all the bikes out. Once they were gone, we headed back into H.O.G. Village to see what was what...lots of sellers stalls, food vendors, an indoor stationary show of 2006 bikes, sponsor tents, etc etc. 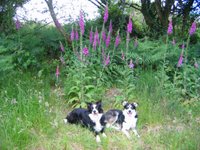 Let me back up and say we took our two Border Collies with us, Daisie (l) and Poppy (r). It was because of them that a good number of people came up to us to pet the girlz and tell us they'd left their dogs behind at home, how they missed them, etc. The people just wanted to pet the girlz because they missed their own dogs so much. It was a great way to meet some of these people and hear their travel stories.

When I said being involved with Harley is family, it's really true. We met people from all over the world, most of who DROVE their bikes to Ireland. We met people from Lithuania, Poland, German, England, America, Canada, Australia, France, Spain...even one guy who came in with a few pals from....Saudi Arabia! The story of all the ferries he had to take and the cross country trek was just amazing.

No one sees nationalities, politics, religions, skin color or anything else that could otherwise fuel anger or hatred. All they see are Harley enthusiasts...the customizations, the models, the character each bike exuded, the travel stories getting to the rally, stories from previous rallies...all sharing in the single Culture that is Harley. 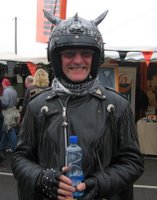 The man here is from England with his wife. We didn't get his name but he came up to us because of the girlz and we had a nice chat about his home, how long they took to reach Killarney, what they thought of Ireland...and of course his crazy helmet. Very Lordi, don't you think? He said he was looking for a Lordi mask so he must have also watched the Eurovision Song Contest this year!

Bikers may have a bad reputation, mostly thanks to Hollywood (which has a lot to answer for), but if anyone wants to see an almost perfect way of life one only has to look at the Harley Culture. Sure, crazy stuff goes on. It does in all clubs. But nothing like other clubs.

Example: We own an older model Austin Mini, now called a classic Mini. We joined the national Mini club in Ireland and for 5 years attended every monthly meeting, even when we moved an hour away from the meeting place. When the new Mini came out, all hell broke loose in the club. Suddenly you had the classic Mini people and the new Mini people, and no one talked to the other. The club broke down because of prejudice and politics. In Harley, if they come out with a new model, it's cheers all around and a welcoming in of any new members to the Culture because of the new model. If it's Harley, it's part of the Culture. Apparently not so with the Mini people. Pretty sad. Needless to say, while we still own the classic Mini, we're no longer part of THAT culture.

One man from Lithuania is working in Ireland for a while, but he told us about getting his precious bike to Ireland. You have to understand that most of the eastern block countries have very little work, even if they are part of the bigger European Union now. Every penny goes to food, housing, clothing, education, etc. This man must have put in a serious amount of overtime to be able to afford the bike he was on. It hadn't been customized, but it was a lovely bike nonetheless, and he treated it like his baby (don't they all?!).

We met a couple from Italy. The wife didn't speak any English, but the husband did a little and told us how they'd left their three Afinpinchers at home. This couple had incredible cowboy-style boots! Another couple were from France. At one point I thought the wife was going to share a real French Kiss with Daisie, but they were very nice and missed their dogs, too...didn't they all. We were stopped all over the place by people wanting to pet the girlz. Crazy! One would have thought the show revolved around them and not Harley.

As unique as the people were, so were the bikes. The bikes were really an amazing reflection of the owner. I shot loads of digital video, which unfortunately is not loaded to this blog because we're on dial-up 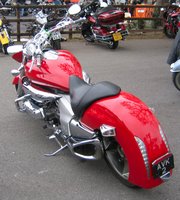 One of the coolest bikes was one I didn't get a good picture of -- he was as elusive as a raith! By the end of the day when we were looking for it, I started calling the owner The Preacher. The whole bike was custom, go figure, but handlebars looked like a frame from a Gothic window, sans the glass. The sissy bar in back was of a similar design. The backrest was built into the sissy bar frame in the shape of a Gothic cross and well padded in black leather. The tank art was of a spiritual nature and the air filter cover was a chrome skull. The owner was a tall man with a beanie style helmet that looked chromed and he had an overall appearance of someone preacher-ish. You had to see it. 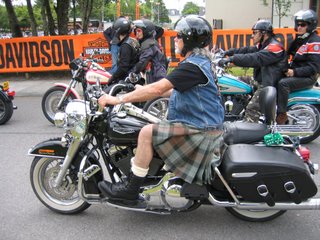 There were bikes with side cars, bikes with little trailors, trikes (one of which carried four people, picture below), and people from all different walks of life. I'll never forget the sight of the Scotsmen in their kilts driving back from the parade, hems flapping to reveal just enough to leave a girl wondering what Scotsmen really wear under their kilts! 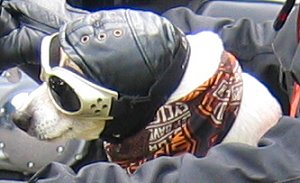 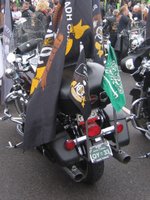 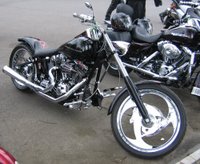 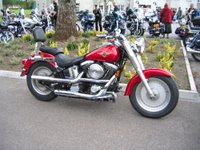 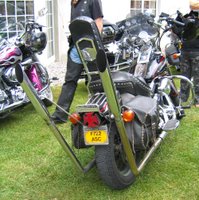 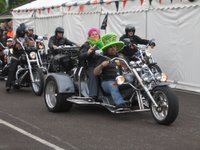 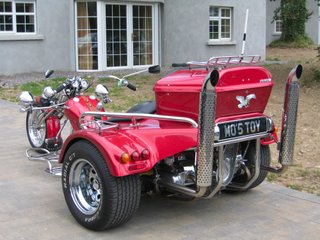 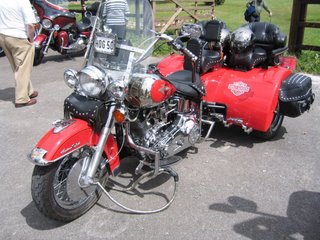 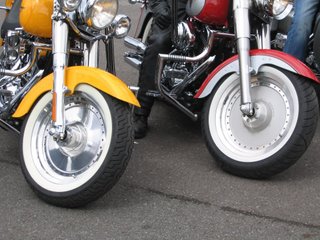 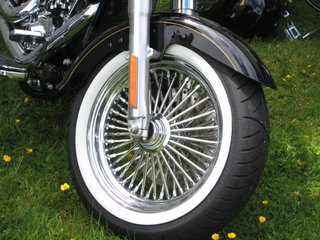 Posted by Kemberlee at 8:24 PM