This is the time of year when Ireland is waking from her winter slumber. She's stretching under cool foggy sheets and groping for warm spots in the folds.

Once barren trees are starting to leaf, wild fuchsia is bushing out, bramble vines are getting into everything, and the grass is growing out of control. It's also that time, given a bit more warmth and sun, just before everything explodes with blooms. The anticipation is palpable! Sure, we've had the usual early season daffodils and masses of dandelions. But the end of April generally heralds the coming of the flower boom known as May. Remember the old saying, April showers bring May flowers? How true! 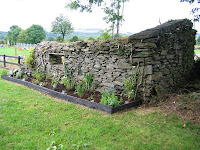 I should back up to mention that our house sits on the property of an old farmstead dating back to the Great Famine. Most of the old stone buildings are gone now, but two walls remain from what was probably a buttery or the like. Beside this building are the foundation stones of what was probably a barn. Today they stones are tangled with ancient...OK very old...beech trees. And surrounding the immediate property is a stream. This would have been a really traditional farm. Thatched roofs and all.

As with any farm, the housewife would have maintained gardens. And one of those gardens included blackberries, black currents and crabapple trees. 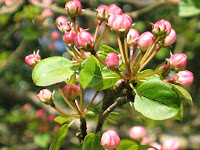 When we first saw the new house, we were taken by the masses of blackberry vines all over the property (can we say gallons of home made preserves?), the massive black current bush we thought was a tree and the crabapples on the trees. And it's this time of year that they begin to bloom.

It seems like it's been ages in coming, but the lime colored leaves have come on really well, and the pink blossom buds make the trees look like they're strung with exotic pearls. Providing the wind behaves itself over the coming weeks, we should have hundreds of tiny green apples. We really must harvest them and try making crabapple jelly.

We've owned our property for almost eight years now. There are about seven and a half acres in all, but the house itself sits in the middle of about one acre, and the backyard is the better part of half an acre.

Over the years, it's been very interesting watching the seasons change. And noticing how no two seasons are the same. For example, last year our backyard was covered in clover. This year it first looked like it was going to be all about the danelions. Then I took a stroll around with the dogs and it's covered with about a million plantains. English Plantain to be specific, also called Ribwort Plantain and Plantago.

Apparently as far back as Neolithic times, land that could grow plantain was supposed to be an indication of fertile grazing land for cattle. And through the ages, both in Ireland and Great Britain, plantain has been used in the making of teas (tisanes) and herbal remedies to treat various ailments such as treating bowel disorders, lowering cholesterol and controlling diabetes. The plantago is one of the nine plants invoked in the Nine Herbs Charm that was recorded in the 10th century by pagan Anglo-Saxons. Knowing all this, I feel like I'm sitting in the middle of a bit of history! So much history for such a little plant.

Or if you grew up in Ireland, as my husband did, plaintains were used in the playing of a game known as soldiers. Once the flowers head had grown, kids would pull them and use them in a game where the stalks were hit against the opponant's stalks like swords. The first one to lop the head off his/her opponent's flower won. Beginning about this time of year in fields all over Ireland, kids had hours of endless entertainment. Well, as long as the plantains held out!

With so much property that changes every season I had to go out and buy a book on Irish wildflowers. It's the Collins Gem series for wild flowers around Britain and Ireland. It's pocketsize, which is ideal for wandering around the property. It's fun to identify what's growing on our property, and collecting samples to press at home.

We have a lot of trees on the property too. The house is surrounded mainly with native ash and some beech, but we also have traditional white blooming hawthorne and sycamore. Some of the trees are very old. But this will have to wait for another time.
Posted by Kemberlee at 7:51 PM