Yesterday I talked about the wildflowers coming up around our property, but I love gardening too. We're still sorting out our landscaping so nothing is in the ground yet, so there are pots all around the house. Mostly roses, lavender, a couple fig trees, a few saplings (sycamore, beech, oak, maple), hibiscus, and the ones I'm most proud of...artichokes.

I come from a part of Northern California where 99% of America's globe artichokes are grown in a small rural town called Castroville. I was raised about 15 minutes south of Castroville, but the artichoke fields spread for miles and miles. Castroville is home to the famous Artichoke Festival. And a little known fact outside of the community is that Marilyn Monroe was crowned the festivals first Artichoke Queen in 1948, back when she was known as Norma Jeane Mortenson!

Castroville is also famed for having the world's largest artichoke. OK, so it's made from concrete, rebar and a little paint, but it's damn big! And it marks where the door is into the Giant Artichoke Restaurant where they sell the world's best deep fried artichoke hearts...and just about everything else made with artichokes. When I was living back home, it was not uncommon for me to drive to Castroville on my lunch hour to get some artichoke hearts then drive back to work. 15 minutes there, 15 minutes back and still have 30 minutes to spare!

I love artichokes. It's not uncommon for me to steam up as many will fit into a giant pot and live off them for a few days. I love, love, love 'em!

Needless to say, moving to Ireland was a huge shock to my culinary system. Artichokes, while a common find in French supermarkets, are virtually unheard of in Ireland. They're a rare find. I've found them occasionally at farmer's markets where the vendor imports their organic vegetables from France, but in the supermarkets? Not a hope. And again, needless to say, I buy as many as I can afford! At an average of €5 each, it's hard to justify paying €20 for four chokes. They're a treat though, and people pay up to €10 for a dessert in an average restaurant here. So... (mangia, mangia...as the Italians say...eat, eat!) You only live once, right? And it's only money!

Last year when my father and his lady friend of 20+ years visited us again, we took them to a great farmer's market in Bantry, Co Cork. It's the biggest farmer's market in Ireland that I've been to. They have stalls for just about everything. One day I'll blog about it, but on this particular visit, one of the stall owners had starter plants for globe artichokes! I bought three and immediately brought them home and babied the hell out of them until I could get them into some big pots. I was really worried that the winter was going to kill them off. It's much colder and icy and occasionally snowy here than in Castroville. But they survived! And now they want to spread out in the worst way. I know they need to go into the ground so I need to get my act together and get the ground prepared. 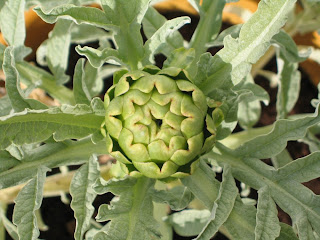 But lo and behold. One of the three little beauties sent up a bud. Really, artichokes are just prickly flowers, but it's hard to call them a flower when we eat them before they have a change to blossom. I don't care though. They're wonderful to eat. Steamed. With a little Gilroy garlic. And masses of home made mayo!

This one here has grown to the size of a small peach, but it's still very young.

And then...then...a second plant is sending up a bud! I'm so excited. And this newfound anticipation is about to kill me.

From what I understand, these first chokes, which grow up right from the top center, are the globes. These are the biggest on the plant. Once these are harvested, the plant continues to grow and sends out several smaller chokes from around the edges. I never realized before, but artichokes have two harvests...the globe and then the rest.

So now, as we watch and baby these two little wonders, we're keeping our eyes on the third plant and hoping for three out of three.

And they'll be all mine when they're harvested, as my husband doesn't care for them! ;-)

There may be no place like home, but it's quite possible to get a taste of home occasionally.

PS...Last weekend at a local garden center I found French artichoke starter plants and picked up three of those too. This variety sends up purple chokes. Not as big, but hey, they're PURPLE!