In my last post I said we were hoping for three out of three with our three artichoke plants. We've been really happy to see two of them sending up chokes. It's official now though. The third plant is sending up a choke, too! And the bonus, the first plant now also has two chokes coming up from the sides. 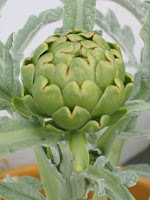 The first photo is the first chokes that came up. The first set of leaves below the globe have secondary chokes coming in now. Whoo hoo!! 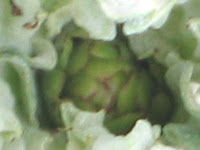 The second picture is the second choke to procude. 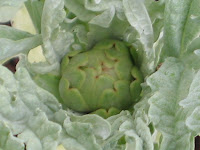 And the third picture is, obviously, the third plant sending up a choke.

Result! Now we're back to suffering the anticipation until they're ready to harvest and EAT!

While I was out taking pictures I was also looking at the crabapple blossom. The buds are starting to open, but I'll hold off posting a photo until the tree is really impressive.

However, while I was looking at the flowers, I happened to notice some fluttering in the trees. There were about a dozen young goldfinches hoping from branch to branch. 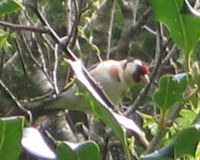 They're SO cute. And the tiniest birds I've ever seen in the garden. When these birds are mature, their breast will be totally gold. At the moment, they just have a little gold patch, as you can see. And the red over the beak will eventually turn bright tomato read and completely encircle the beak.

The weather is not looking good for the next week. A storm is brewing in the North Atlantic and it's supposed to hit the hardest on Wednesday this next week. But we'll see how the weather really is. It's not like the weather service hasn't been wrong before.
Posted by Kemberlee at 3:37 PM