The Sweater Saga and a Choke Update 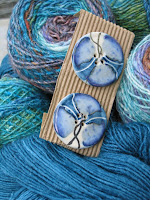 A couple years ago I participated in a Secret Santa gift giving program through the Irish Knitters Group on Ravelry. It was my first time doing something like this and really enjoyed it.

My secret pal, Aileen, sent me a lovely package that included fabulous pair of huge Fair Trade buttons. They're white ceramic that have been hand-painted with cobalt blue. Where the layers overlap it looks vaguly purply-teal. Really pretty, as you can see. But two buttons didn't seem like enough, so I bought a few more. Love em! I also bought some heart shaped ones in the same color and style, but that's another topic!
.
Since receiving the package I've been looking for just the right yarn to make a cardigan where I could use the buttons. At the time, I had just been turned onto a yarn called Noro Silk Garden so I knew I'd use that, but what colorway? I found the "blue" (colorway 264B) looked the best with these buttons. I love Silk Garden, but it's a striping yarn. I didn't want to be covered in blue strips, so I decided I wanted to do a new stitch I'd learned called entrelac. Entrelac is a French term meaning interlacing or woven. The effect makes the resulting fabric look woven. It's done in short rows that come out looking like diamonds, and with this type of yarn, the diamonds look like they meld between color changes. And while I love the effect, I didn't want to be covered in what's essentially basket weave! So I decided that the entrelac would be along the hem and cuffs, which meant I needed a color for the body work.
.
I'd originally chosen a wool, Debbie Bliss Luxury Donegal Tweed in a blue denim sort of color. I wasn't thrilled, but it was the best of my choices at the time. It worked up quickly and I had the back and both front panels done and started on one sleeve. Then I stopped. I didn't like how it was coming out. The wool was too stiff and I didn't like the texture. Silk Garden is 40% silk, 40% mohair and 20% lambs wool. It's relatively soft when worked up, and the 100% pure wool of the tweed just wasn't working for me.
.
What else I didn't like about it was that I'd started with the entrelac hem and joined the tweed when I was ready to work the rest of the panels. but in doing so, it left big holes between the yarns where the joined. I thought I could live with it, but with the holes and the stiff wool, and the ugly side seams on the entrelac, I decided it wasn't working for me.
.
So I ripped the whole thing out.
. 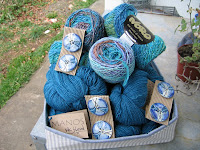 Since then I've been looking for just the right yarn for the body and sleeves. The search went on for about 9 months. But as soon as I saw the yarn I wanted, I knew it was "the one" and couldn't not get it.
.
The yarn is Manos del Uruguay Silk Blend in what I call Peacock Blue, but the company calls Orinoco Blue (colorway 2444). You can see here how well the colors go together. You can probably also see how they compliment each other in the first picture.
.
I'm designing this cardigan myself so it's not just a labor of love, it's also a learning experience. I've written out the base of the pattern and am tweaking as I'm knitting. I'm using one of my favorite sweaters as a guideline for measurements, which helps.
. 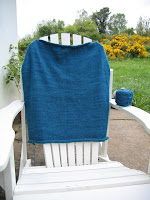 So now, after a month of mainly knitting at night over episodes of CSI, Fringe, and the rest, I've finally managed to get to a stopping point on the back panel. I'm knitting the cardigan from the top down this time, as the entrelac will join with the plain knitting better. And I've now started the first of the two front panels. When the time comes, I'll join the side seams and do the entrelac in one piece along the bottom.
.
My current problem is making button holes big enough for these massive buttons!
.
So...on which side do buttons go on a woman's cardigan!! ;-)
.
~*~
.
A little catch-up on the artichoke saga...

Choke 1 is the first one and is now about the size of a man's fist. The side leaves are starting to produce secondary blooms. I'm not sure when the top globe should be harvested, but I'm sure once it has been that the smaller ones will come on quickly.
.
Choke 2 is about half the size of #1 and the leaves are starting to produce secondary blooms too.
.
It's choke 3 that I'm worried about. Looks a bit like it's been watered with run off from Monty Burns's nuclear factory! At least it's blooming something.
.
Now I just need to learn how to make my own mayo so that I can say I grew my own chokes and will eat them with my own mayo. But...does that mean I have to raise my own chickens so I can say I used my own eggs? I. Don't. Think. So! Gotta draw the line somewhere.
.
Next project, hopefully this weekend, will be to plant the seed potatoes that are sprouted in the bag we carried them home in! I've got some purples in there. Should be interesting!
Posted by Kemberlee at 2:51 PM