My first harvest and more signs of summer 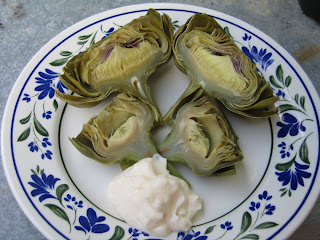 I'm so excited, I had to share. I've harvested my first homegrown artichokes. They weren't very big, but they were yummy and a great taste of home. There are several chokes still growing along the main stem that I hope will be ready by the time we return from Wales at the end of the month. We have a wonderful neighbor who will come up every few days to make sure all my pots are watered, so there's hope!
.
Our neighrbor is terrific. Our house sits in the center of a field, essentially, and we've gone through two lawn mowers trying to keep the grass under control. He comes up with a 1964 David Brown tractor with grass blades on it and in 15 minutes the grass has been subdued!
.
Anyway, summer seems to have arrived in Ireland at last. There were reports during the week of temperatures reaching as much as 35C in the midlands. 35C is 95F to us Westerners! Pretty dang hot for Ireland. Down at our place, temps reached 76-78F on Wednesday. Just right for me!!
.
Last Sunday we had an interesting experience. It was a scorcher of a day and were at home...doing the last minute tidy before mom's arrival next week! One of the dogs started barking, which drew our attention to the front of the property. In the front of our gate at the street was a man who looked like he was on safari...dressed in khaki, wellies and a pith helmet, and carrying binoculars, which were trained on our trees! My DH went out to see what the story was, and it turns out that Mr Safari was a member of a conservation group of birdwatchers, and he was going around the area making notes of which birds were around, including the migratory birds. He was watching our trees because he'd just spotted a bird that's rarely seen in this area!
.
My DH invited Mr Safari to come off the road and take a walk onto our back property. It's located well off the road and is really wild. Mr Safari jumped at the chance. He finished his walking route to he river at the end of our road, then came back. He was only up there about ten minutes then came back to ask if he could come back with a friend and take some pictures. He said he wasn't back there five minutes and spotted TWO species of birds that have never been recorded in this area. He didn't say what they were, but he's coming back in July with a friend to spend a few hours on the back property to see whatelse they can find. This will be a really important find for local history, as it turns out. Our local bypass road was halted because of rare slugs in a woods they wanted to take down. If other rare and unusual species of wildlife are discovered, the whole bypass could be either completely rerouted or halted entirely.
. 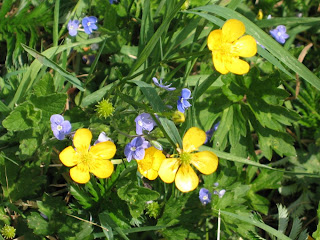 With the change in the seasons, we're still seeing a change in the flora. Our back yard has seen spreads of plantego change to spreads of shamrock to spreads of dandelions. Now we have spreads of meadow buttercups and germander speedwell. Speedwell is a very tiny blue flower so you don't normally see it unless you're on top of it, so yard was looking very yellow again. But the speedwell is really coming on this year and there are patches of blue everywhere. 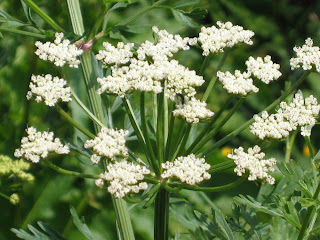 Another plant that's common to damp areas, such as around our stream, is something called cow parsley. It's also known as Queen Anne's Lace and is a member of the carrot family. They're fairly prolific. Every summer we have to go into the stream and pull them out by hand. Some of them have stems on them as big as a mans wrist! But they're beautiful when they bloom. 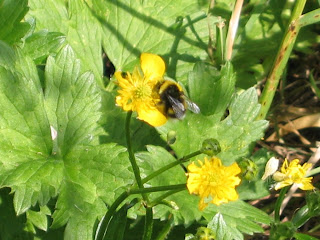 We've also been seeing a large number of buff tailed bumblebees. I have a potted thyme that's kind of taken over the pot now and has really beautiful little blue flowers on it. The bumblebees seem to love it. By the looks of this one, the buttercups are a popular flower to feast on, too!
Posted by Kemberlee at 1:35 PM