I know it's been a long time since I've posted here, but my excuse is that my mother's been visiting over the summer and I've spent all my free time with her rather than sitting in front of the computer. I'll catch up soon, but I wanted to post a few pictures from Heritage Week here in Macroom.

Heritage Week is a national Irish event. Here in Macroom, our knitting group got together and collected some traditional Irish knitting and put them on display. One display cabinet is full of tea cozies and another is a series of socks in various stages of construction. There are also a few samples of traditional Aran patterns that go onto jumpers (pullovers) and cardigans (sweaters). 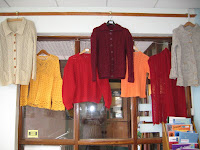 Hanging up in another part of the library are some FOs (finished objects) from some of the knitters. One woman brought in a couple crocheted tops she made a couple years ago.

Other ladies brought in some cardigans, one of which is a masterpiece of traditional Aran stitchwork.

The shawl in the photo is mine. It's the red garment hanging on the right. It's made with a stitch pattern called Feather and Fan. It's actually a stitch that originated on the Shetland Islands of Scotland, but it's made its way to Ireland many years ago and is a much beloved pattern. I've made several scarves with this patter in recent months, but I love the shawl. I used a baby alpaca wool so it's ultra soft and warm too!

I'll probably get slaughtered for this, but here's a picture of my friend Ruth who 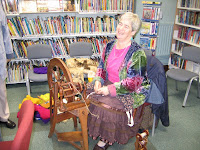 brought her spinning wheel into the library for demos. It was really great to see her working the wool into something worth knitting. She had a collection of Jacob's wool, which is that crazy looking four horned sheep, and a selection of predyed wool from Kerry Woollen Mills. I know she's been spinning some of this wool for a blanket she's making. I can't wait to see it when it's done. I know how much work she's putting into it. It should be stunning! 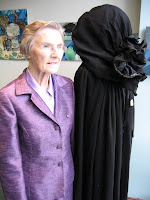 Finally, here's another picture I'll probably get slapped for. This is Ilene who's standing beside her great grandmother's cloak. She said the cloak dates back to pre-Famine times...the Famine being 1840-1845. The cloak is in remarkable condition, considering its age. There were two cloaks on display. The other was a younger cloak but in terrible condition, as it was moth-eaten and torn. Ilene's cloak is a real gem. It really should be in a museum.

These cloaks, also known as hooded cloaks, were the traditional garment worn in many parts of Ireland. The way the cloak is displayed, it looks a bit like a Middle Eastern burqa. But when worn properly, the ruffles surround the face of the wearer with the hood hanging down the back to catch the woman's hair. The big ruffle is meant to direct rain away from the face, and the length of the cloak would protect the woman's dress and protect her from the cold.

There were other traditional garments around Ireland. In places like Galway, women wore shawls like those seen in the movie The Quiet Man. In fact, all of the shawls worn in the movie were bought from the "Shawlies," as the women were called then, for use in the movie. As cheesy as this movie was, there was quiet a bit of authenticity about it.

And of course, there is the traditional Aran jumper, which has all the different stitches.

Also on display in the Macroom Library is a photographic display of the railway history of Macroom. Maybe locals still remember when the train came through town, as it made it's way between Cork City and Killarney in County Kerry. But with the increase in wealth and more people being able to afford cars, train use fell in popularity and eventually most rail lines around Ireland were pulled up and sold to India. Of course, with the increase in tourism into Ireland, those rail lines could really come in handy with travelers who don't want coach tours or to hire a car of their own. Who knows? Maybe one day Macroom will have a light rail of some kind to move people into the city as part of a commuter transport program. Might be a cheaper option to that bypass they keep promising us!

Anyway, I hope you enjoy the photos.
Posted by Kemberlee at 11:46 AM