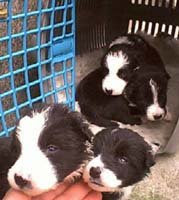 Independence Day, 4 July, means more to us than just an American holiday, fireworks and barbecued food. Today, eight years ago, our dog Daisie was born.

Well, we assume she was born eight years ago today, as that's when a farmer found her and her sisters. Four newborn pups had been put into a plastic fertilizer bag that was tied with bailing wire and thrown into a bramble covered ditch up a quiet country road! It was a miracle that the man was walking in his field that day and heard the crying. He immediately took the puppies to a local woman who worked with the local no-kill shelter. Based on the looks of the pups and the day that was in it, they had to have been born and disposed of that day.

The pups were raised by this woman in her home for eight weeks, then put them up for adoption. She advertised them on the shelter's website, which is where I first saw them. Daisie's the one in back with the big, white blaze. When we went to the rescuers home to look at the puppies, they were scrambling around like crazy furballs.

When we heard the story of their discovery and how they came to be in this place we were heartbroken and overjoyed at the same time. How could anyone throw away such adorable fluff muffins?? But how fortunate that one of them chose US to go home with? We would have taken them all if we could.

As we chatted, one puppy came over to us and laid down at our feet. And went to sleep. While the others gamboled around like tops, this pup felt safe enough with us to take a little nap at our feet.

As I was going through the pictures we've taken of her through the years I found it difficult to pick which ones I wanted to share. I first thought one from each year would be fun, but as I started collecting them, two things came to mind:

1) There were too many to choose from. Not everyone loves Daisie like we do so they probably wouldn't want to look through our 'baby pictures.'

2) I started getting sad. Daisie has always been a very healthy dog, but she's getting older and she has early onset canine dysplasia which has gotten much worse in the last year. While she's on medication, we're aware that she won't have as long with us as a dog without dysplasia. Going through all of her pictures made me melancholy. It was like I was putting together a memorial.

So I scrapped the picture for every year idea and decided on these few. Even while I'm still melancholy, I can't help but realize just what a happy dog Daisie is. I couldn't find a single picture in the hundreds we have where she looks anything but happy. And that makes me feel really good that we made the right decision to take home the little pup who fell asleep at our feet.

So here's Daisie over the years doing some of the things that make her the happiest.

This picture was when we took Daisie to a 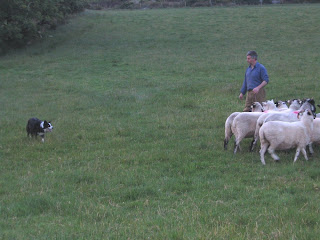 hill farmer friend in West Cork. Border Collies are said to be the smartest dogs on the planet. I can attest to that. But the first day we took Daisie to his farm, he let her loose in one of his fields and we both watch in stunned amazement how she ran up the field, circled the sheep and brought them down to us. No commands. And she'd never been let out with sheep before that day. She'd seen them from the car as we drove, or walking along our road at home, but never like this. Our friend was so impressed with her he offered to buy her! That was never going to happen, but we did let him keep her for a month to train. And so impressed was he that he talked to his chums about her. When we brought her home again we had arranged to take her back three days a week so WE could learn the work. We also attended a regional herding trial held on our friend's farm, where several of the competitors said that Daisie was the talk of the group. Our friend was also so impressed, he suggested we train her for trials. They would help us find a way to get her in even though we couldn't prove her lineage, and that she was fixed. Let me tell you, many of the farmers that day asked if their best dogs could mate with Daisie.

Unfortunately, it was a few months after this time when we had to take Daisie off sheep because we realized her hip wasn't strong enough for the job. She was about two at that time, if I remember correctly. But that's OK. Fun is fun, sheep or toys, it's all the same to Daisie. 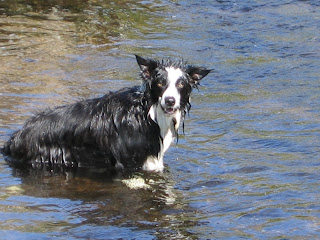 This picture up is, obviously, Daisie in the water. I swear, she must have been a tuna in a former life, but cause she LOVES the water. In the summer months when we still lived in West Cork, she could often be found snorkeling in one of the deep areas of the stream along our property. Doesn't matter where she is, if there's water, she's in it. Head under and looking for rocks. She brings them up to us, then races back into the water and waits for us to throw it back in. Then she goes snorkeling again. Rarely does she bring back the same rocks. Doesn't matter. She loves the game.

And it doesn't matter if it's liquid water or the frozen stuff. The next picture is her in the snow. She loves snow about as much as she loves the water. The first time we took her to the snow she loved it so much she refused to get back in the car to go home. It was like herding sheep ourselves as we both surrounded her and guided her to an area where she coundn't escape. We hated having to get her back in the car, but it was getting dark and neither of us fancied staying in the woods all night. And certainly not in the snow. But every chance we've had over the years, we've taken her to the snow. 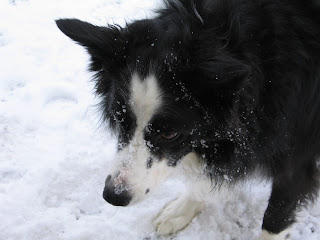 weeks. The longest snow we've had in 50 years I'm told. Daisie loved it! We took her out often under the guise of going potty, but she'd have none of that. She wanted to play. The above was her sometime this January. I had tossed her a snowball. She caught it in her mouth and it immediately disintegrated. The look here was 'What happened? I had it a second ago!' She's looking at a spot in the snow where she thought it went and was gazing intently, waiting for it to reappear like one of those 'pop goes the weasel' games.

Now that the weather has improved, and we're getting some very long and very warm days, Daisie gets to go out for more play times than in the winter. But some days she prefers to just lay in the sun in my office. As the sun moves across the floor, so does Daisie. 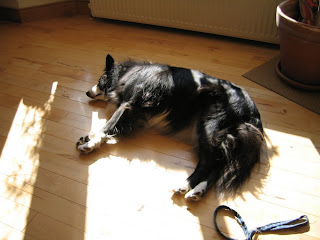 Finally, the last picture is Daisie doing what she loves the most. Waiting for me to throw the ball. This is Daisie's adapted version of a collie crouch. She goes down on her elbows and waits. Her paws crossed. That's supposed to be a sign of intelligence. I don't know if that's true or not, but I do know that she knows the name of more than 200 toys (including ones she no longer has). She remembers people she's met through her life, even if she doesn't see them very often. And even though she hasn't worked sheep since she was two, her instincts are clear. A few incidents have reminded both myself and my husband how ingrained her instincts are.

Once when another friend was winter his horses on our back property in West Cork, one of them got loose and found its way to our house over the hill. Daisie saw the horse on the rise and ran right out to it. And drove the horse to where I was standing. Incredible.

And recently when we'd taken the dogs to the Curragh in Kildare, where sheep graze in the thousands over several thousand open acres, Daisie spotted some sheep coming over the rise. The Curragh is a great place to take a tennis racket and ball and let the dogs run after it. But when Daisie spotted sheep trotting past the car she abandoned the ball and ran for the sheep. Instincts kicked in and away she went. It was incredible to see her work. This last picture was taken on that day. No sooner had we called her back, she ran up the grass once more and right into her waiting position. And this is the position that greets us every time we take her out for potties. No matter how badly she has to 'go', she always wants to chase the ball first. We can all take a lesson from Daisie, no matter how bad you think you have it. Run around with your friends, play as often as you can, take time to enjoy the sun, and always remember, no matter what, your family loves you. 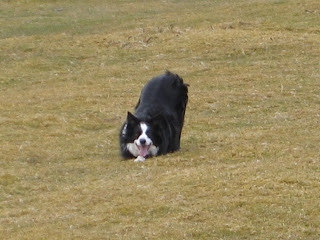 I don't usually make such a public announcement of our dogs' birthdays (Poppy was born on Christmas Day!), but with the recent release of my book, A Piece of My Heart, some have asked what inspired me to write the story. Plain and simple. Daisie had a story to tell. Since she can't type, I wrote it for her. Daisie's original name when we got her, rather when she got us, was Molly. (sisters Millie, Minnie and Missie...real original!) Long story short, Daisie is the Molly in my story. And the incident on the farm in the story came from Daisie. So A Piece of My Heart is as much Daisie's story as it is mine. And let's face. She certainly has a piece of MY heart!! 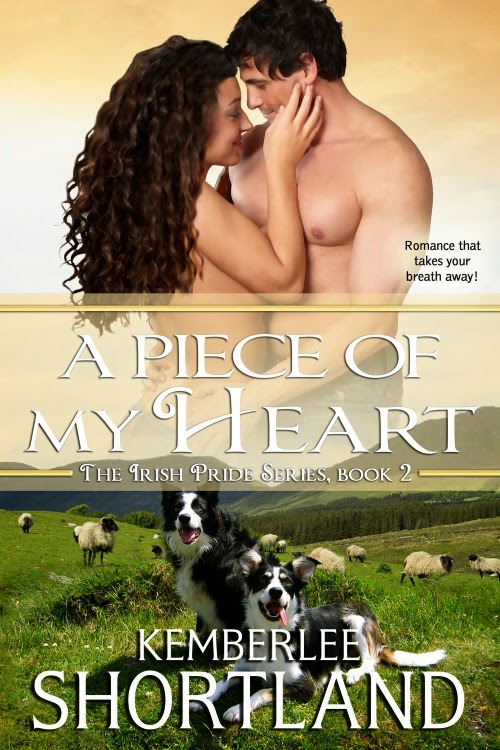 Edited to add: Daisie passed away peacefully on 19 October 2015. 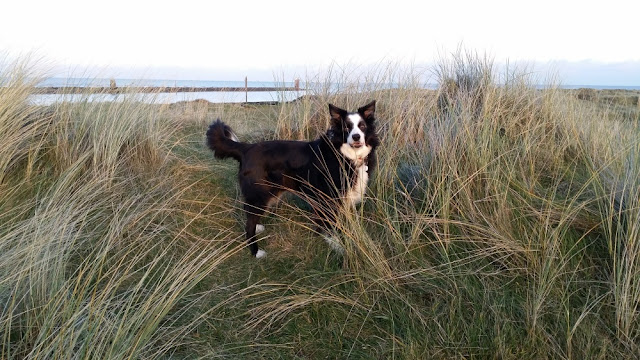 Posted by Kemberlee at 2:34 PM