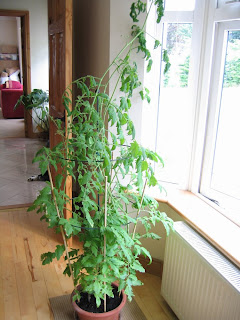 Never mind me. I'm just going to blather on about my plants again. Seems I do this every summer. Usually because I have something growing somewhere. This year it's Money Maker Tomatoes.

There are actually two tomato plants growing in the one pot. Having never grown tomatoes before I had no idea they'd take over the place. It's barely noticeable, but there is a central stake with two rings attached to hold the plant upright. But the pot is very shallow so we had to anchor that with a few bamboo stakes to keep the thing from falling over.

Currently, this pair are sucking down about a liter of water a day. Saturday I poured in two liters because we were away over the weekend. But sure enough, this morning I had to soak them again because the dirt was looking dry and cracked. I can tell when I've over-watered when excess water drains into the catch tray. I've never once seen water in the catch tray of these greedy water mongers!

At least they're healthy. I've been feeding them about every other watering, mostly because I forget every time, 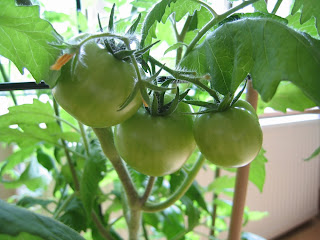 but there are loads of yellow flowers coming out, and as you can see, the first batch of tomatoes has started. They're about golf ball size at the moment, but I'm hoping if I can remember to feed every watering that they'll grow big and plump.

Anyone who knows me knows I can't stand raw tomatoes, so it's funny that I'm growing them. But that doesn't mean I have to leave them raw. Ratatouille here I come!

It seems our office just loves the light. The living room and office both are in the front of the house, but it's funny how just a few feet make all the difference. The living room gets sun, but not like the office. The office is usually a couple degrees warmer than the living room, and miles warmer than the back of the house. In here I'm growing not just my tomatoes, but also my avocado tree, which I thought I'd killed last October when we moved. The first weekend we were here we had a nasty frost and the tree dropped all it's leaves and the trunk died half way down. But I brought it in, watered it well and put it in front of the window, which is also where the radiator is. It's also a water monger, but at least I didn't kill it. That would be a shame after growing it from a pit from the fruit about 13 years ago! At one time it was up to the ceiling, but it's a tidy little bonsai wannabe now.

I don't know why I've done it, but I've started a couple more avocado trees on my kitchen window sill. Well, I might know why. Peter got a bonsai tree for Xmas and I thought it might be fun to see what a bonsai avocado would look like. I'll need to get new pots though because the one we had when Peter repotted his tree is now growing a bonsai sycamore...as pulled out of the gravel from our driveway!

I know I'll never get avocado trees from the pits. It's just not hot enough in Ireland. They also require a second plant to cross pollinate. Maybe the new pair will give us some results!

Did you know that the word avocado comes from the Nahuatl Aztec word ahuacatl which means testicle, a reference to the shape of the fruit, and because they grow in pairs. The word can be compounded with other words, as in ahuacamolli, meaning 'avocado soup or sauce', from which the Mexican Spanish word guacamole derives. Did you also know that the English language includes many Nahuatl words? I bet you didn't know the words chili, chocolate, coyote and tomato are also originally Nahuatl words. Cool or what?! 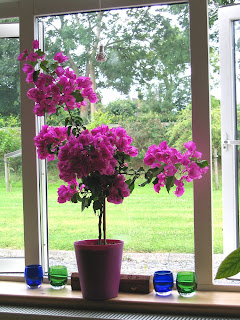 My real pride and joy at the moment is my bougainvillea. Bougs are sun worshipers, and well, Ireland doesn't really get much sun. This summer though has turned out really bright and warm and my boug is loving it.

When I bought my boug it was literally the pot and a flowered head at the top of a bare stalk. The first week I had it, it dropped all the flowers and I almost thought I'd killed it because I know how fussy they can be. But the leaves were still green and healthy and once it saw the sun it exploded with hundreds of flowers and just keeps blooming and growing.

There's a great garden center we love to go to on the weekends called Johnstown Garden Centre. It's a huge place that includes a big wing full of house and hot house plants. In it they have a few bougs that have been bonsaied. They're in big shallow pots, but the trunks on them are huge and the overall plant isn't more than four feet high.

If I stretch out my arms to either side of me, these bougs are easily that wide, and them some. Not ideal for just any home, and especially not at the price they're asking. But 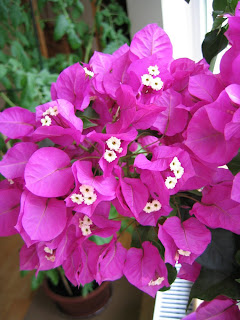 I pretend they're mine, but that they live in the shop! Every now and again, the staff move them and they drop their flowers, but the next week we go back and their flourishing again.

Meanwhile, I just keep watering mine and feeding it occasionally. I know they really like to be left alone and watered occasionally.

I remember the bougs growing up the side of our garage when I was younger. They'd only get watered when it rained (not often on the Central Coast though they also seemed to like the early morning and late evening fog) or when I washed my car. They grew up the south facing wall so they were in sunlight all day, and the white stucco house reflected back the heat onto them. The plants must have loved it because they were huge. If they hadn't been so thorny, I could have thrown myself into them. I don't actually like the color pink, but I make an exception for bougs! They're not really pink at all but a wilder version of purple!

And did I mention my watering can is purple? Yeah, baby!!
Posted by Kemberlee at 4:25 PM