A couple years ago, I wrote a post to celebrate Daisie's birthday. When we became a family the first week of September 2002, Daisie was just eight weeks old. Counting back, her birthday fell in the first week of July so we decided to call her Independence Daisie and celebrate her birthday on the 4th of July. Little did we know we'd add to our family the end of January 2004. The vet guestimated she was four weeks old, which put her birth during Xmas week. As you can guess, we celebrate Poppy's birthday on the 25th . . . Xmas Day. Most of the year she's known as California Poppy, my home state's flower. This time of year, she's a Christmas Poppy! 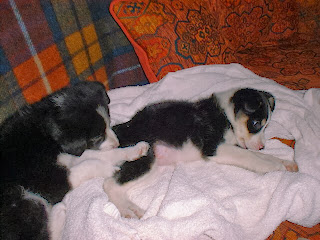 I received a call early one morning from a woman working in the Macroom (Co. Cork) town hall. She'd received a call from a local man asking for the number for the dog catcher. Apparently, he'd woken up Xmas morning to find a bitch and two newborn Border Collie puppies in his front garden. He took them in with the intention of finding homes for them all, but as soon as the pups were weaned, the bitch took off. The man had raised a fox from a pup, and now the fox and pups were clashing. He couldn't find homes for the pups so wanted the dog catcher to come get them. Long story short, we got the call, as we had been known locally to have worked with a couple rescues in the region. "Would you look after the pups until we can find homes?" we were asked. "Certainly," we said. We had no idea our lives were about to change. Again.

The pups, a girl and a boy, weren't healthy. The girl was bloated and the boy was emaciated. The girl was eating the food of both pups (obvious by the bloating in this first image) while the boy got almost nothing. Both had parasites (tape worm and ring worm), conjunctivitis, upper respiratory infections, and malnutrition. They immediately went to the vet who suggested putting them down. "No way!" We wanted them to get the best treatment possible. If they didn't survive, at least we tried. Of course, this treatment included daily baths to treat ring worm . . . as well as give them back their puppy smell (love that!). Pictured above after their first bath.

Four weeks later, we returned to the vet for their check up and full vaccinations. The vet laughed and asked us where we found more puppies. He was taken aback when we said these were the two he thought wouldn't survive 'the cure.' 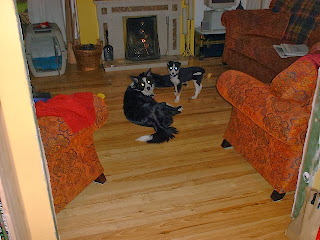 Daisie was 18 months old at this point and had only ever seen other dogs at obedience class. And certainly nothing this small. She was allowed limited access to the pups until they were healthy, and as soon as they were, proper introductions were in order. Seen here, the pups were about eight weeks old. You can see the bloat is totally gone from the girl and she's all legs! You can just see the boy lying down in the background and has filled out. Daisie wasn't sure what to do with herself, but we were surprised to see her maternal instincts kick in. And when she discovered the pups wanted to play . . . well, Daisie was in heaven!

We were very surprised by Daisie. Being a girl, we were sure she'd bond with the boy puppy. But incredibly, it was the girl pup she wanted to play with. The boy was kind of shy and preferred to sit on the sidelines and watch the girls play, and more often than not, found his way onto my lap while the girls roughhoused. He was growing to be a sweet boy, but a loner.

Around this time it became apparent that it was time to rehome these two. We really had a hard time with this. How does one find themselves with two very sick pups on their hands, nurse them back to health then send them away? But we had to. So the notices went up. 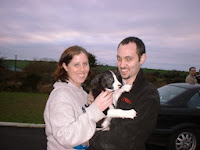 The boy was placed first. After careful scrutiny, he found a lovely home with newlyweds near Blarney, Co. Cork. They'd just built a house beside a cattle farm in the country. We took the pup to their place for a home inspection and found them to be lovely people. The whole family had shown up for the 'adoption'!

As time went on, we visited again to see how things were getting on. They'd named him Samson and as it turns out, the neighboring farmer started taking Samson out with the cattle in the morning. Samson loved it! As we'd later discover, the pups most likely came from a cattle farm rather than a sheep farm, so it made sense he'd love working with cows. 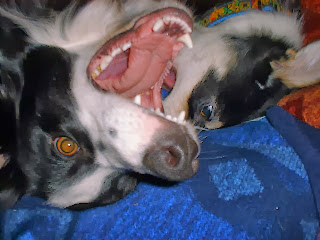 So, the girl pup was next. There were several prospects. A woman from one of the no kill shelters had seen our notices and rang about placing the dog with one of her friends who was looking for a dog. Then we found out it meant shipping her not only to England, but to London! She was to become an apartment dog.

Really? I don't think so. You do NOT put a working dog in an apartment in the city and expect life to be hunky dory. We didn't want this dog to end up in a London shelter, possibly being put to sleep because of destructive behavior . . . which we were sure was going to happen. So, no. She wasn't going to London. There were a few other prospects, but in the end, she stayed with us. She was the perfect companion for Daisie, and by now, they were like sisters and virtually inseparable. 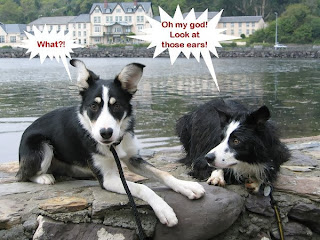 From day one, we hadn't given the pups names. We'd just called them 'puppy' . . . "Here puppy, puppy, puppy" had them all running to us, Daisie included. But now that Samson had a home and we'd decided to keep the girl, Poppy seemed very fitting . . . California Poppy, my home state flower.

By May, Poppy was five months old and growing into her legs and her ears! Here we are at the Bamboo Forest Park in Glengariff. Daisie had found the water so looks like a soaked rat. The breeze caught Poppy's ears at the right moment. (note: in the background is Ireland's oldest hotel, the Eccles, established in 1724, and has remained open full time since that time!) 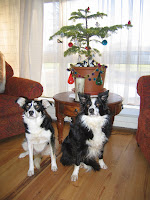 Here we are, Xmas 2005. Poppy is now two years old. Her little spotty nose has filled in and her ears are as 'up' as they'll ever get.

By Xmas 2007, we discovered that it wasn't the present inside the paper Poppy liked, but the paper. Kids! Get them a stellar toy and what do they want? The BOX! 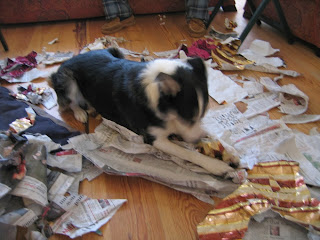 Here's Poppy doing her annual paper shred for the holidays. The anticipation on her face when she hears the crinkle of the paper, the joy on her face when you toss a wad of it to her and the utter joy as she goes to work shredding for Ireland! 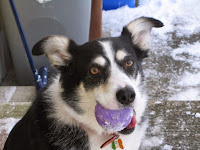 Fast forward again to 2010 and our family had made a move the previous year and we're getting the second of three snow storms in 14 months -- January 2010. Nothing deters a dog from a game of ball! Even if the ball is frozen and sticking to your tongue :-) 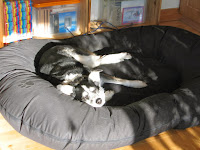 In the new house, we set up an office in a front room which got the most light. Probably not ideal when working on computers all day, but it worked for us.

At the back of the room was the dog bed, one which we'd dubbed The Raft because it was as big as a life raft and fitted both dogs cozily.

We occasionally got days with good sunshine. When that happened, we could almost always find Poppy in the raft, on the sunny side, soaking up the rays, like a good California Poppy should. Dreaming of real California sunshine, dog? 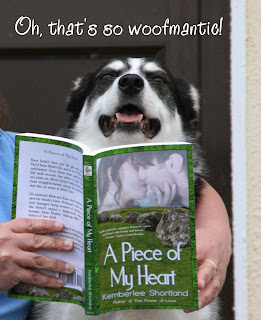 It's been a long known fact that Border Collies are the smarted dogs on the planet. There are stories all over the net about Borders who know the names of over 300 of their toys (Daisie knows about 150+). They can herd just about anything from sheep to ducks. And they know umpteen commands, especially when it involves going o-u-t. We've had to spell the word because if we say it, she races to the nearest door. 'Out' equates to fun . . . fetch, going in the car, going for a walk . . . going in the car so we can go walking in a place where we can play fetch is best!

But she must be able to spell too because when we spell o-u-t, she now heads to the nearest door! So does this mean dogs can read? I think so!

Poppy is a great dog and has been a wonderful part of our family. She's been so much fun -- we can't imagine ever not having her. She has a great personality and constantly keeps us laughing and on our toes. If Poppy was a human, she'd definitely be a party girl. She's all about the fun, and rarely without a toy.

For years, we've said, "Poppy is like a *real* dog. You throw something and she'll not only get it, but also bring it back." Of course she will. If she brings it back, she knows you'll throw it again. She can go for hours. 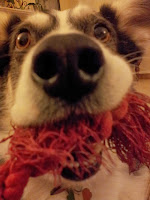 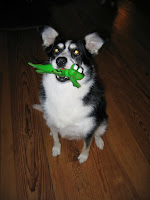 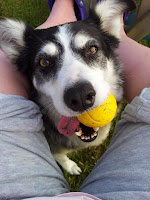 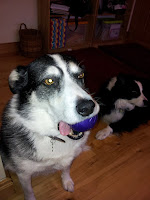 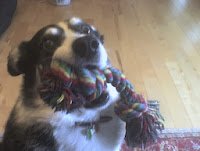 Poppy is also known as the Dog of a Thousand faces. She's very expressive. I hope you've noticed a few of those expressions on this post. Between her bat ears and her ever-changing eyes (really! her left eye has turned black over the years. see below.), we can pretty much tell what she's thinking. Not difficult really because it usually revolves around going out, a toy, or wanting up on a lap . . . or as close as she can get! 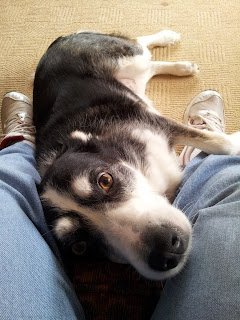 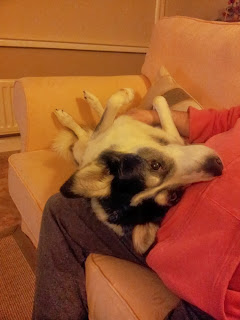 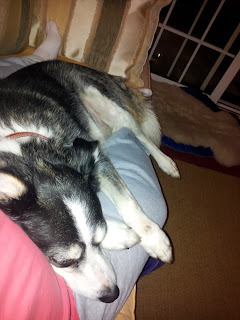 As most readers here know, I published a book a couple years ago called A Piece of My Heart. The story was largely based on Daisie, which I mentioned on Daisie's birthday page (see above link). But the puppy character I called Jess is based on Poppy.

I've recently bought back the rights to that book from the publisher and will be republishing the book in April with a new cover. When I saw the final results from the cover artist, I got very teary-eyed. I'm so excited to have both by dog-babies on the cover of this wonderful story. The official cover reveal will take place in February, but here's a teaser -- 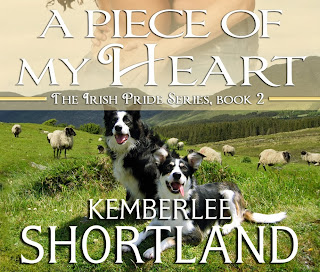 I'm trying to think of something to say to close out this post, but I both can't think of anything while also still have so much to share. We have thousands, literally, of photos of both Daisie and Poppy over the years. I'd share them all if I could.

I will say this. Poppy, above all else, is a very loving and happy dog. She's happiest when she's with mom and dad. And we're happiest when we're with her, and Daisie.

While they're both getting older, we can't help notice how puppy-like they still are. Makes it fun for us, for sure! They're so much part of our little family and add so much joy to our lives.

This holiday season, and for Poppy's birthday, we feel so blessed and fortunate to have her in our lives. Had we made the decision to allow the shelter place her in an apartment in London, we would not have had such a wonderful life experience with this special little dog. 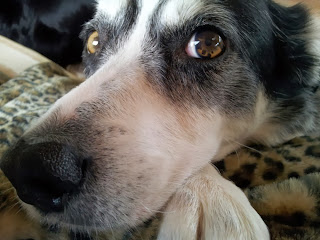 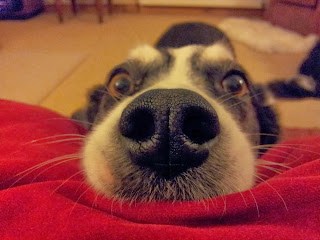 Posted by Kemberlee at 6:48 PM