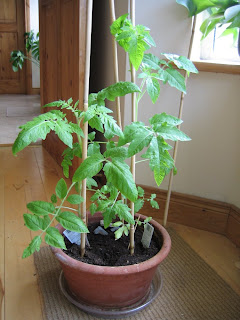 Spring is here and with it everything that involves fresh starts. And not just all that stuff going on outside with the flowers, trees and little lambs, foals and calves!

Here are a few of my fresh starts for the year --

Last year we grew some tomatoes in our office window. You can see that post here. The vines went wild and we only got a handful of small fruits that looked more like cherry tomatoes than the fist size ones we should have had. So before trying again this year, I read up on the dos and don'ts of tomato growing. Contrary to popular belief, it's not just a matter of putting a seedling in the soil and watering it occasionally. There's an art of pinching back suckers AND they do like the occasional feed. Go figure.

So this year, we picked up two more seedlings. One is for yellow ones called Golden Sunrise and the other is a red called Roma. They were both the same size when we bought them -- about 2 inches -- but the Golden Sunrise seems to be growing leaps and bounds over the Roma. They're both large enough now that I can get out my rings to hold them up. I don't think I'll let them get as high as the ceiling this year though ;-)

Another project on the cards, so to speak, is wool. Anyone who knows me knows what a knitting enthusias 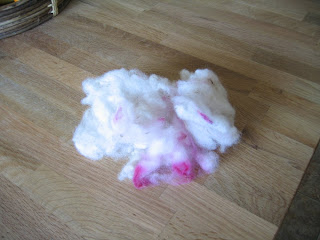 t I am. Give me a couple sticks and anything resembling a long, fiberlike substance and I'll make something out of it! I have yet to delve into spinning though, which is where this project comes in.

We take our dogs running at a place called The Curragh, currently a national parkland, was once a place where ancient kings of Ireland raced their chariots and horses. The Curragh today has multiple functions, including being home to the Curragh Racecourse, a golf course and the Curragh Camp where the Irish Army trains (not the IRA, sorry folks, and yes neutral Ireland has an Army!) And some seens in the movie Braveheart were filmed here, amongst other places in Ireland (that was an Irish movie folks. Don't let the Aussie in the skirt fool you!)

Around 50,000 acres makes up The Curragh, most of which is grazing land for sheep to help keep the grass down. County Kildare, by and large, is flat compared to most of the rest of the country -- real Big Sky Country -- but the Curragh is actually made up of short rolling hills and drumlins, and thousands of gorse plants. Gorse is a thorny shrub that blooms amazingly yellow this time of year. Sheep bed down under it for protection at night. As a result, they're constantly getting their wool snagged on the thorns. Which is where I come in!

When we take the dogs running up there I sometimes take a little plastic bag with me and collect the cleaner bits of wool snagged on the gorse. Then I bring it home, wash it and card it into something that can be spun. This sample was from the last collection, which has been washed and ready for carding. In fact, I have carded it now, removing all the seeds, burs and tangles. I just need to find my drop spindle and learn how to spin it! But hey, free wool, a little processing and then I can knit with it!

Incidentally, the peasants of Ireland who couldn't afford to buy prespun wool, or who had their own sheep and wanted to add weight to their fleeces before sale, would gather wool off the gorse, as I have. This is where we get the term 'wool gathering' when we're thought to be day dreaming. Girls who went gathering wool would often daydream in the process. So there you go now, as the man says! 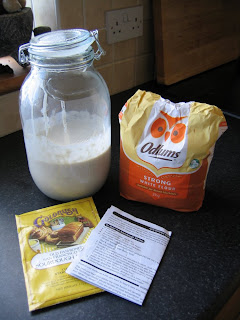 My other project for the year as part of my fresh starts is actually a starter. A sourdough starter, in fact. I was given a packet of Gold Rush starter, which is a dried active yeast from a San Francisco starter that's about a million years old and figured I'd better use it. This picture is a bit dated now, but this starter was born on 27 April 2011 and is growing by leaps and bounds.

I've never done this before so it's all a great learning experience. I'm a firm believer that no matter how old you are, you should ALWAYS learn one new thing a day. Every day I work with this starter I'm learning something -- mostly that I suck as a baker!

Actually, I'm getting better. I've made four loaves of sourdough bread so far, each one tasty, but all of them with problems, which is why I'm not sharing pictures yet! I'll post the recipes i'm using and the process of the perfect loaf when I have a perfect loaf.

That's not to say I haven't used the starter with great success. The very first thing I made with my starter was pancakes! The starter was only five days old but they came out great. I'll put up that picture too when I update this topic with bread pictures. I'm also looking for a good pizza crust recipe, too, so if anyone has one to share . . .

Life is full of ironies. It was just this morning Peter said to me, "We decide to cut back on our carbs and what do you do? Start filling the kitchen with bread." Yep, that's me. Full of irony. And a little contradiction. :-D
Posted by Kemberlee at 2:16 PM