The Lovers of Valdaro 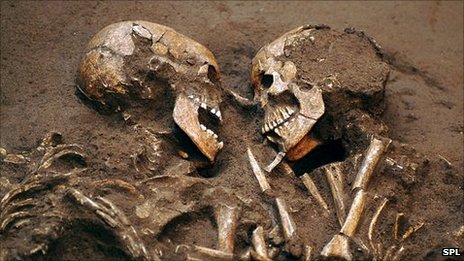 (Apair of human skeletons found at a construction site outside Mantua, Italy, are believed by archaeologists to be a man and a woman from the Neolithic period, buried around 6,000 years ago.
Archaeological Society SAP/AP)

As a romance writer, sometimes when I'm fascinated by interesting articles I like to share them, hoping some likeminded person will find them just as interesting. Such as this one -- The Lovers of Valdaro, also called the Valdaro Lovers.

Expected to be around 6,000 years old, this pair of 'lovers' was discovered by archaeologists at a Neolithic tomb in San Giorgio near Mantova (today's Mantua), Italy in 2007. Scientists believe the pair is a man and woman no older than 20 years of age and were approximately 5'2" in height. The couple were removed to Musei Civici in Como for tests and investigations.

While No one can be certain of the precise history of this pair, but it's been speculated upon that the couple was either placed in this position after their deaths by someone else, or it's possible they died while embracing in freezing weather. It's also possible one of them (most likely the man) passed away and the woman was killed so her spirit could follow his into the afterlife. No artifacts were found with the bodies and there are no distinguishing marks to suggestion a cruel demise for either of them, which leads to further mystery, which allows imaginations to run free. And why wouldn't they, as Mantua has an illustrious past where star-crossed lovers are concerned --

If the name Mantua rings a bell, it should. Mantua was the city where Shakespeare's Romeo was exiled as punishment for killing Tybalt Capulet.

This couple was discovered in 2007, but what brings them back into today's limelight is that they were put on public display for the first time this week at the Mantua Archaeology Museum. This exhibit is temporary though, as funds are being sought to build a dedication building in which to house the lovers.

Whoever these people were and whatever the reason they came to be in this embrace, this romance writer would like to think this young couple were deeply in love, and even their deaths could not separate them. It's nice to see that archaeologist, in their quest for discovery, have left the Lovers of Valdaro in their eternal embrace. WorldCrunch -- A web service translating foreign news pieces into English.
Posted by Kemberlee at 9:59 AM