You say tomayto, I say tomahto

Last year I grew tomatoes in my office window. I had so much fun and learned a lot so I figured I'd try it again this year. Below are my results.

Back in May I posted Fresh Starts, which included the planting of new tomato seedlings: Roma tomatoes and Golden Sunrise tomatoes. Taking lessons learned last year, I've been making sure to pick out the suckers, which forces the plant's energy to concentrate on growing fruit. After a time, I also started cutting back leaf stems, as they were shadowing the fruit clusters too much. Even still, this is what the vine currently looks like -- 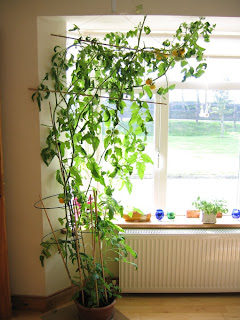 Yeah, the plant is so crazy it's tilting in the pot and forcing the supports to go cattywampus. But check out the fruit! Below are just three clusters of ripe tomatoes. 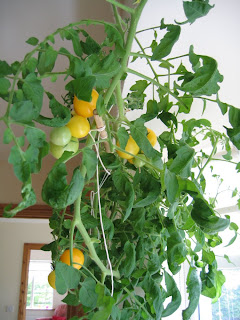 Here's a close up. They've all turned yellow now and have been picked for tonight's dinner. Thinking of making my famous stewed vegetables and use yellow tomatoes this time instead of yellow. Stay tuned for results! 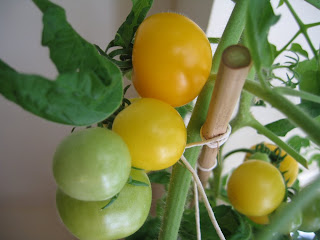 Hmm . . . maybe I should be thinking Fried Green Tomatoes here -- 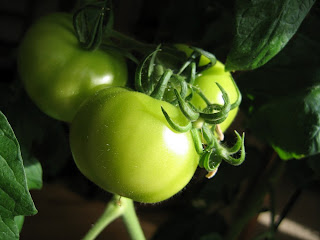 Here's one of the Roma's. Unfortunately, they're not as prolific as the Golden Sunrises, but at least they're now starting to turn red. I'll have two Romas unless the other flowers fruit. What to do, what to do . . . 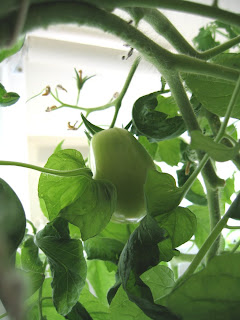 Last year when I grew my first tomatoes, I didn't realize the flowers had to be polinated. Never occured to me, but being in the office window with the window open on nice days probably encouraged a few flying critters to come in and walk around on the flowers, inadvertantly polinating them. Or it's possible the breeze carried pollen from flower to flower. I have no idea, but we did get a few small tomatoes that were very tasty.

This year I mead a point of using a little (clean) paint brush and touched it to each flower as if it were a bee, and it seems to have worked. That and picking off suckers. Currently, there are some 40-50 green tomatoes left on the vines. I've picked off the first 10 ripe ones for tonight. They're not huge . . . maybe a little bigger than a golf ball . . . but it's the flavor I'm after. I don't eat raw tomatoes so I'm very hopeful for the cooked ones.

Having said that, Peter had one in a sandwhich last weekend and said it was one of the tastiest tomatoes he's ever had, so they must be good!

Other than that, not a lot to report, but I hope you enjoyed seeing the *fruits* of my summer labor.

Visit my post Farm to Fork to see what I did with the tomatoes last year.
Posted by Kemberlee at 2:22 PM