Since it's been a while since I've posted to this blog, I thought I'd start updating with one of the most recent things we've done. While in Cork recently, we visited the newly opened Fort Camden. 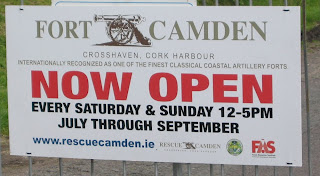 For concise history of Fort Camden, go to the history page on Rescue Camden's website. Briefly --

The first fortifications were built in Cork Harbour in the 17th century, although these were primarily to protect Cork City. In the 18th century, fortifications were built on Haulbowline Island to protect the anchorage in Cobh. Fort Camden, and Fort Carlisle across the harbor entrance, were both built during the time of the American War of Independence, aka the American Revolutionary War (1775–1783). This should give American readers some context of the history of the time. But while a revolution was being fought in the Americas, there were still troubling times in Ireland and north Europe, and the location of forts around the entrance to Cork Harbour were instrumental in guarding the English Channel and into the Irish Sea. 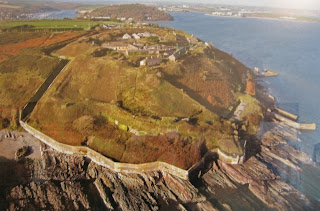 Fort Camden was fortified and extended throughout the 18th and 19th centuries and has become one of the world's finest examples of a classical Coastal Artillery Fort.

Cork Harbour, the second largest natural harbor in the world (second to Australia's Sidney Harbour), at one time maintained four such forts -- Camden and Carlisle protecting the harbor entrance, and Spike Island and Haulbowline Island in the harbor center. Anyone daring to try to get into Cork Harbour would have been met with serious difficulty from all sides.

During the Second World War, the Irish Army formed its own coast artillery service with headquarters at Spike Island. The Coast Defence Service was maintained at Camden until it was dissolved in 1949, at which time the fort was closed and remained in disuse and un-maintained until recent times, as you can see from the massive overgrowth from a once dry moat. 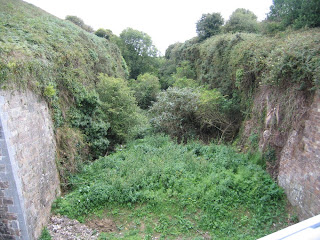 In 1989, the Cork County Council acquired ownership of the fort and planned to restore some facilities and create The Military Heritage Centre and tourist attraction, including visitor accommodation, watersport facilities (boating on Cork Harbour and safe swimming locations around the docks), craftshops and restaurant. 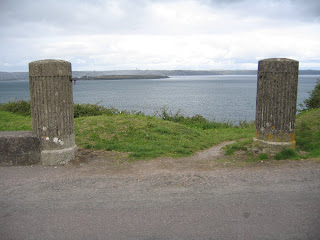 Sadly, that did not come to pass. But locals would not be deterred. After twenty years of talks between the Cork County Council and Crosshaven Community officials, an agreement was made in July 2010 for the restoration of Fort Camden as part of a FAS program working with local volunteers. Over the last year, teams of men and women worked hard all over the site clearing debris, cutting back overgrowth and making safe many of the buildings. And in July 2011, Fort Camden welcomed in a new history for the fortm as visitors were now allowed onto the site. 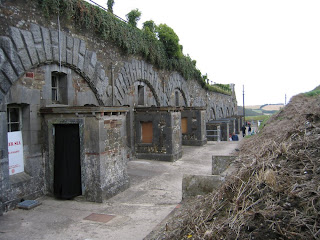 Above is the main Casement Building which once housed soldiers' sleeping quarters (sleeping ten to a room in peace times and twenty to a room in war times), latrines, showers, medics, mess hall and more. Today, while they've been made safe for exploring, only a few are set up for displays. The chamber below has been filled with a shallow pool of water, the corners of which contained submerged pumps that keep the water circulating under and otherwise still surface. Local children made 'boats' which seem to sail on their own steam around the pool. 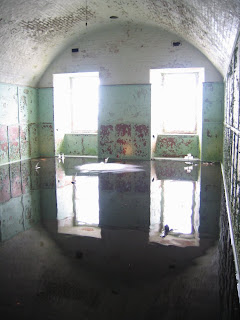 In another chamber is a display of letters, orders, and other notable items that were discovered on the site when volunteers were allowed in to clean-up. Letters like this one give an interesting account from a soldier's point of view. This letter includes --

This soldier apparently hoped to find a willing girl that night except it was raining too much! He also referenced going joy riding. But again, the rain put a hold on that too. Maybe a good thing for the car owner!

Remember that the Easter Rising started in April 1916 and this letter was penned just 14 months later. News of a rising in Cork was probably common during the time as Irish rebels fought for independence from Britain. It would be interesting to know whether or not soldiers from Fort Camden were enlisted to subdue rebel fighters or if they were strictly guarding the harbor. The letter also mentions a local boating accident which enlisted had attended, saving two men. 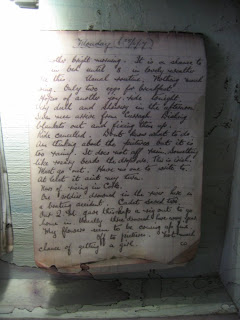 There are, I believe, five tunnels through the hillside to various points around the fort. Two of them lead to the two harbors around the site, one of which is currently open and it the longest one on the site. Here's the entrance -- 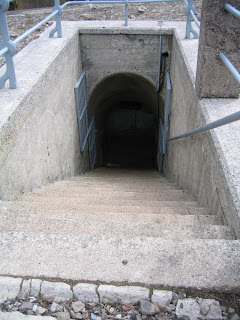 Once through the gate, soldiers would have been met by a long, dark tunnel before reaching the stairs. There are no windows along the tunnel so it would have been very dark without a lantern. Once at the stairs (seen below), there are narrow windows along the left side of the tunnel. They would have allowed in some light, maybe just enough to see by, but not terribly bright. Electric lights are now fitted for visitors, and make for interesting photography. 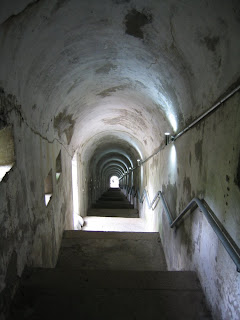 There are level areas between sets of five steps as one descends the hillside through the tunnel. I lost count at around 100 of how many steps down to the gunnery area. There was a lot more than that, I'm sure! At least it felt that way. 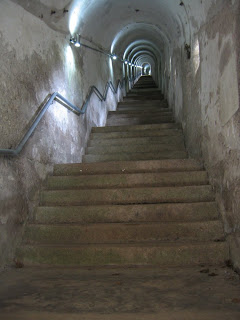 The tunnel leads to a gunnery area where cannons were mounted on raised platforms along the gunnery walls. Munitions buildings face the cannons, as did other related occupations such as smithing and a hospital room for the injured. The photo below is the main entrance into the gunnery area if one arrived by vehicle from the other direction. Impressive architecture! 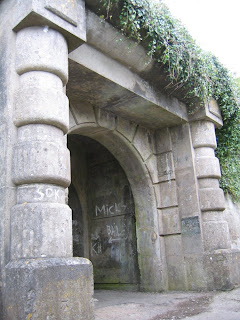 Just outside the stone entrance above is also the entrance down to the main harbor. Below are a couple pictures of the seafront harbor area. Storage, barracks and other chambers are built into the hillside. As you can see by the date, 1871, this area would have been refortified in that year. The second harbor or dock area is seen in the background on the harbor side of the site. 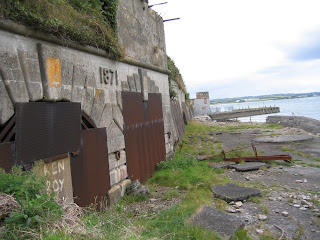 Here is a view from the main harbor/docks looking out at Fort Carlisle, which guarded the opposite side of the harbor entrance. To the right, the wide open Atlantic. To the left, Cork Harbour. 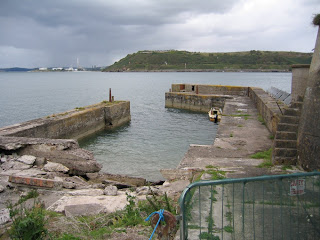 Unfortunately, due to the disuse and not being maintained while closed, the dock has been destroyed by undercurrents, which are collapsing it. The piers seem to be solid enough.

A bit of trivia -- My husband's family used to spend summers in Crosshaven. There's a sandy beach on the Atlantic side of the fort where they rented a house by the week. Kids used to scale the cliffs around the fort walls (see the above aerial photo!) to the harbor and fish for mackerel for their dinners and swim within the pier arms. Our visit on this day was nostalgic for him in this respect and allowed him to finally see what was beyond the barriers in the fort. 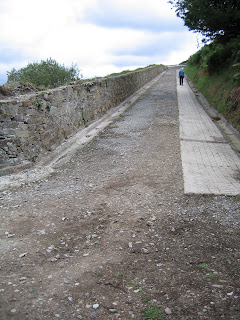 From the harbor, one must either retrace their steps back through the tunnel (remember all those stairs!) or take the zig-zag road. When I say this road is steep, I mean STEEP. At each bend in the zig-zag are benches to rest upon. What they really need it one of those stair lifts people put in their houses! Maybe, eventually, they'll have enough funds when restorations are done, to put in some form of transportation for people not really fit enough for mountain climbing. And let me tell you, it's a climb. Scroll back to the top of this page to the aerial photo and you'll see the long, straight tunnel going from the top of the site to the harbor, and the zig-zag road. 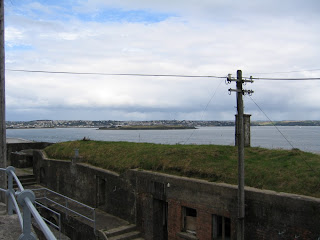 At the top of the site is a stunning view of Cork Harbour. Seen here is Spike Island in the center of the harbor and Cobh in the background. Cobh was the last stopping place for Titanic, where she picked up Irish immigrants, before sailing to America. I think we all know how that ended! 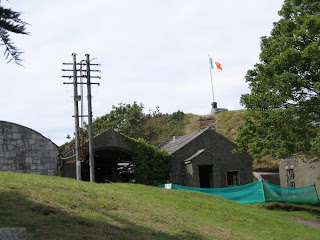 The Irish tricolor flies from the highest point on the island. Below it are a number of buildings, including officers quarters, more barracks for enlisted, repair shops, motorcade, and more. Here's one of the work shops below -- 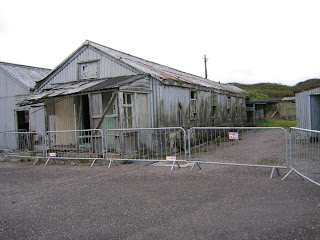 What I find incredible about this site, aside from some interesting architecture, the tunnel systems, the location, the view and the history, is that simple things like an original brick path still exists and with it's original gutter. It shows a sign of the times when roads were traditionally cobbled. Considering the bland nature of today's road surfaces, I think seeing old cobbling like this brings a certain level of class or style to something as important as a military instillation. 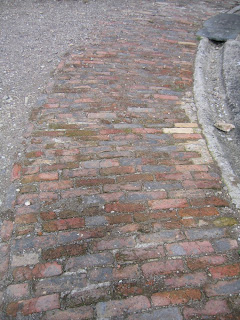 There was so much to see at the fort and from the fort. One really would want to visit personally to really understand the importance of the site. One might get an inkling from seeing pictures, but to actually be there is another story. 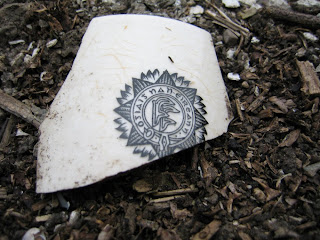 The phrase Óglaigh na hÉireann was coined as an Irish-language title for the Irish Volunteers of 1913, and it was retained when the Volunteers became known in English as the Irish Republican Army (IRA) during the War of Independence of 1919–1922.

Following the Treaty which created the Irish Free State, the Provisional Government in 1922 formed the National Army. To establish itself as carrying on the tradition of the pre-independence movement, the Army adopted Óglaigh na hÉireann as its Irish language name, and also adopted the cap badge and buttons of the Irish Volunteers, the former of which incorporates the title in its design. Since 1922, Óglaigh na hÉireann has remained the official title in the Irish language for the Irish Defence Forces, which are recognised by the Irish Government as the only legitimate armed forces of the independent state on the island of Ireland.

That means this piece of pottery, and thousands more like it found around the site, was in use when the fort was Irish occupied . . . from at least 1917 (re the above letter) to 1949 (when the fort fell into disuse).

Be sure to log into the website for Fort Camden for information on the restoration of the fort and their gallery of images.

Also, check out the Wiki page for Cork Harbour for detailed military history for Cork and Cork Harbour.
Posted by Kemberlee at 11:48 AM