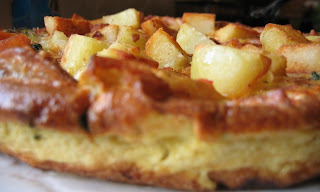 I'll just let you savor this photo for a minute. Go on, have a look. Don't you wish you could smell it? All the herbs, fresh veg, spuds two ways... It's okay to drool. Have a good look. Yummy!

In Ireland, Farm to Fork is an initiative of traceability of food, literally from sourcing at the farm and tracing each step until it reaches your plate. Since the initiative was introduced, the quality of home grown foods has improved significantly. When I say 'home grown' I mean food grown in Ireland for consumption in Ireland. These foods have a modern history of only being available at farmer's markets, and while supermarkets are keen to sell Irish grown produce, farmer's markets are still THE place to go for the best of the best. Unless you grow it yourself. In this case, I'm talking tomatoes. Or in Irish, trátaí...pronounced traw-tee.

In my last post, I shared a photo of our tomato plant, which we're growing in our office window because it's so bright and warm there. Also on that post is a photo of the first of the tomatoes to fruit on the vine. Well, here are those same tomatoes, ripened and ready for eating.

Aren't they pretty little things? They weren't very big. Perhaps the size of a small lemon. But they were firm and smelled lovely. So I gave them a rinse and prepared them for the meal. A vegetable fritatta with tomato salsa.

I have to stop here and say I've never grown tomatoes before, so this has been a great learning experience for me. I tried growing one vine years ago in my kitchen window when we lived in Macroom, but the window just didn't get a lot of light or heat. The vine grew a little, then died. With our new office window and so much warmth and light, it was the perfect place to grow tomatoes. And the vine has gone insane. It's currently up to the ceiling, curling around the ceiling and will probably need another support so the flowers will develop into tomatoes and have support so they don't break the vine. After this first batch, I'm determined to grow as many tomatoes as possible while I can. And look how gorgeous they are sliced in half. To be honest, there weren't a lot of seeds. and they were so ripe, the skins peeled off in a snap.

So, onto the fritatta. We had leftover new season spuds from the night before and some off cuts of various veg in the fridge that needed to be eaten. I'm tired of stir fry so what a better way to use them up than in a fritatta. Here's the recipe I used, but keep in mind that any veg you have going spare in the fridge, or even some peas or corn from the freezer, works great. I also added in a couple slices of thick cut BBQ deli ham...since we had it. Us whatever your favorite combination of veg is. Just make it colorful. Like, don't just use all green or it will just be boring looking, even if it tastes good. Part of eating enjoyment is the visual. You'll see what I mean in a minute.

Turn on the broiler or grill first so it can heat up while you're sauteing your veg.

Put a medium sized heavy non-stick skillet on medium to high heat, add a generous amount of olive oil. When hot, gently toss in your sliced spuds. You want to lightly brown them on both sides. While these are cooking, you can prepare your other veg, unless you're efficient and have them already done. Brown the spuds in batches so you don't break up the slices. As they cook, remove onto kitchen paper to drain.

When you're done browning the sliced spuds (remember they're already cooked, you're just reheating and browning), cook up your diced spuds. Cook them like country fries. You want to be sure there's a generous amount of oil in the skillet for this because you want these crispy when they're done. Cook in batches so they don't just steam. Remove to kitchen paper to drain and get ready to saute your veg.

Your veg should be diced. Not too finely, but not too chunky. You want them to saute quickly. You probably won't need more oil after the country fries, but if you do, use it. I never said this was a non-fat meal! When the oil hot, toss in the onions and peppers first. Mix well and saute for a minute or two before adding in the broccoli and asparagus. Continue stirring occasionally so nothing sticks or burns.

While this is cooking, mix all 8 eggs in a large container and scramble well with the sour cream. Add a little salt and pepper if desired.

Just before the veg is completely cooked, add in the garlic and mixed herbs and stir well. Be sure the veg is evenly coated with the herbs.

When this task is completed, remove the veg from the skillet into a bowl and wipe down the skillet to remove any residual cooked-on bits. Return to the heat, add enough olive oil to thinly coat the bottom of the skillet. Turn down the heat to medium and return the sliced spuds to the skillet. Arrange evenly at first. Any leftovers can be doubled up to cover any big gaps in the first layer. Then spoon your cooked veg onto the spuds and layer evenly.

At this point, if you want to add in some sliced precooked meat, such as the thick sliced BBQ deli ham I used, or even some precooked chorizo, which would be nice, add it now on it's own layer. The result should look something like the picture below on the left.

Once your layers are completed, pour your scrambled egg mixture over the lot. Gently giggle the skillet to jostle the veg and allow the eggs to get into all the gaps. Use the back of a silicone spatula to press the veg down and to rearrange the veg so all the colored veg is spread evenly around the skillet. When you're satisfied, add your chopped tomato to the top. Now your skillet should look like the above photo on the right. Yum!

Allow the mixture to cook on the stove for a few minutes. Use the silicone spatula around the edge of the egg to loosen it from the skillet, pulling the veg mix from the edge too so it doesn't stick. If you're brave, you can use your silicone spatula to gently lift the edge of the fritatta, tilt the skillet so any excess egg runs to the bottom of the fritatta. This will do two things -- 1) help to keep the bottom from burning, and 2) shorten the cooking time under the broiler/grill.

As the fritatta is cooking, add your country fries to the top. When you're satisfied the lower half of the fritatta is cooking, slide the skillet under your preheated broiler/grill. Not too close, perhaps the second rungs down. You don't want to burn the eggs. Just brown them nicely and cook them all the way to the middle. The bottom will have already cooked on the stove. You're just finishing off the top. Don't be afraid to pull out the skillet a few times and use your spatula around the edge. During this part of cooking, the eggs will puff up and should pull away from the edge naturally. Test the middle to be sure the eggs are cooking.

While the fritatta is cooking under the broiler/grill, make your salsa.
Here's the recipe...

Add all of your ingredients to a bowl as you cut them. Blend well, adding a small splash of lime juice. Use a small spoon to taste for flavor, adding salt and pepper to taste, or more lime, cilantro or chilies. Salsa is subjective, so just add whatever extra flavors you want until it's perfect for you.
When you're done, the salsa should look something like the picture below on the left.

Note: If you double the salsa recipe, reserve half and peel some avocados for guacamole! Unfortunately, I didn't have any ripe avocados or you would have also got that recipe.

When your fritatta is done, remove from the oven and let it sit for a couple minutes to firm up. Then gently remove it from the skillet onto a large serving dish. It should look something like the picture below on the left.

Slice as you would a quiche. Admire your layered veg on the inside! This is what I meant above. If you just use one color veg, you won't have all the lovely colors mingling through the eggs.

Serve warm with your homemade salsa on the side, along side some guacamole if you made it.

This is a great all-in-one meal. Serves 4 generous portions. In each serving you have most of your daily veg, just two eggs, and all the goodness that comes from wholesome ingredients. It also makes a wonderful breakfast. No better way to start the day!

So this is my Farm to Fork. I grew the tomatoes in my office window...my farm...and they went straight onto my fork two ways...added to the top of the fritatta and in my salsa.

Reader challenge -- Make your own fritatta and salsa, then send me the pictures. I'll post them on a future blog. Go on. Start now. I'll wait!
Posted by Kemberlee at 11:44 AM